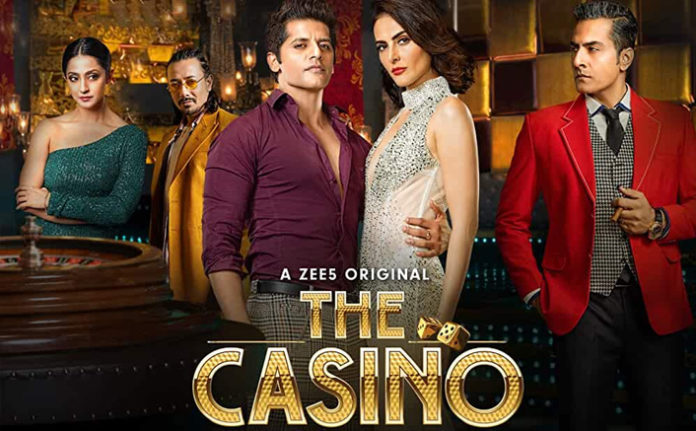 Zee5, one of the largest online streaming platforms in the country, recently caused a stir due to the planned release of a new web-series named ‘Godman’. The show was suspended after a backlash from religious and political groups, labeling the show as Hinduphobic. In its place, Zee5 instead went ahead to finally release a new web-series called ‘The Casino: My Games My Rules‘ on the 12th of June. The show was originally scheduled to premiere back in April alongside the anticipated season 2 release of ‘Poison’ but was delayed for unknown reasons. Now it’s finally here! Unfortunately, the series leaves a lot to be desired.

‘The Casino’ is a crime thriller directed by Hardik Gajjar and the plot revolves around power struggles within a large casino empire in India. It’s fast-paced, full of plot twists, romance, and steamy passionate scenes. The series reflects the current gambling environment in India and its legality, where casino operators often exist in a limbo between legal and non-legal. The show tries to cast a light on the dark side of casinos, the dirty money that is being laundered and in the case of the web series, all the shady networks that are connected to it. All of this makes for a realistic and exciting series, right?

The series uses an old formula often used in Bollywood: a “suspenseful” story about the super-rich, where the bad guy is the foe’s sidekick – something we figure out in the very first episode. ‘The Casino’ doesn’t even try to be unique, and despite plot twists and steamy scenes where everyone sleeps with everyone, there is nothing captivating about the series. With the exception of production values. Strangely enough, each frame is high-quality, the scenes and production values are magnificent but the story and the script just don’t hold up. Each character is single-layered, there’s the thirst for power and not much else. In short, the scriptwriter Deepak Pachori did not do a good job. One of the main characters says he desperately wants to walk away from his criminal life, all the while he seems to enjoy killing off people every chance he gets. Parallel-stories are weaved into a new episode just to disappear in the next without a trace, leaving the viewer dumbfounded as to what is going on and the show leaves a lot of unanswered questions at the end of the 10th episode.

The series follows three central characters, Rihana, the beautiful dancer, and seductress played by Mandana Karimi. Marwah, a powerful and crafty billionaire businessman played by Sudhanshu Pandey and his son and successor Vicky Marwah, played by Karanvir Bohra. Each episode largely revolves around the lead characters committing crimes, being caught by the police and getting bailed out. The main plot is about the power struggle between Rihana and Vicky as they both are looking to cease control of the casino empire. Vicky is introduced as a simple brat but comes off as a complete psycho. Rihana has a relationship with Marwah, making her an almost-stepmom to Vicky, all the while she and Vicky also have a steamy relationship. This makes for a weird triangle drama. The story gets more awkward as new characters without any backstories are introduced to the half-baked plot. Mandana Karimi does a convincing job as a villain. The overall cast needs to get some credit though, even though they are hardly believable, they deliver their cringe dialogue with straight faces.

Watch this series at your own risk if you have nothing to do. At the very least, try to enjoy the truly great lighting, sound, scenery, and props in this production.