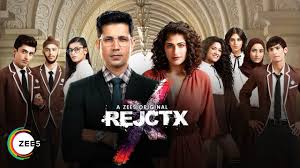 Director Goldie Behl’s first web series RejctX shone on the screen. It is a musical web series that was watched with great curiosity by both the viewers as well as the critics. The makers decided prior to the first season commencing that a second season of the show would be released. The show has an ensemble cast with some of the brightest actors from the platform of web series like Sumit Vyas, Kubra Sait, Ahmed Masi. The series has a strong base with themes of social relevance and deals with strong societal issues like porn addiction, gender fluidity, drugs and infidelity. The story was a hit among the masses as these are the root causes for disruption among the youth.

RejcX is a fast paced thriller of a coming of age theory led by Goldie Behl. It revolves around a band who come together to showcase their talent and moreover freedom of expression. The series is directed by Goldie Behl and has been shot in Pattaya, Bangkok.

Music, Mystery, Deception and Betrayal. All the makings of a high school drama in Rejctx

RejctX is set against the background of the most elite residential school in the world. The characters are all placed in around this vicinity and their actions revolve around this background. The web series deal with the situational changes that occur over the missing case of a child. This case leads to many revelations that shock everyone. Secrets about each person come to the forefront that shocks one another. Kiara Tiwary (Anisha Victor) is an under confident character who lacks self confidence in the actions she undertakes. She is fashionable and poignant despite all this. The story revolves around Ahmed Masi Wali’s character Aarav Sharma who is privileged and belongs to an affluent political family. Along with Kiara, his girlfriend, he starts a band called the Rejects which become a momumental hit. Ridhi Khakhar, a famous model based in Mumbai joins their band as a member.

RejctX boasts of a stellar cast that dazzled onscreen with their performances. Each actor shone brighter with the shades of their character being portrayed so brilliantly. The cast includes some of the best actors from the digital platform such as Sumeet Vyas, Kubbra Sait, Anisha Victor, Ahmed Masi Wali, and Ridhi Khakhar

Jefferson World School is back in session ? Watch what hits their world in #Rejctx2 #ComingSoon #AZEE5Original

Sumeet Vyas for the first type was seen as a character with shades of grey. This broke the mold created for the actors and did wonders for both the series as well as the actor. Kubra Sait as always is spectacular onscreen and never ceases to amaze the audience. The show deals with everyday life concerns that people face which makes it very relatable. The show has many twists and turns to its credit and it takes time for the main screenplay to unfold. There is enough tension within each episode that makes it gripping for the viewer. There are dark moments in the story which makes an interesting watch. The best part of the series is its climax which makes your forget the mistakes made along the way. The revelation behind the kidnapping unveils deeper darker realities of the other characters.

RejctX Season 2 will be streaming on Zee5. To be able to watch the show follow the following steps: