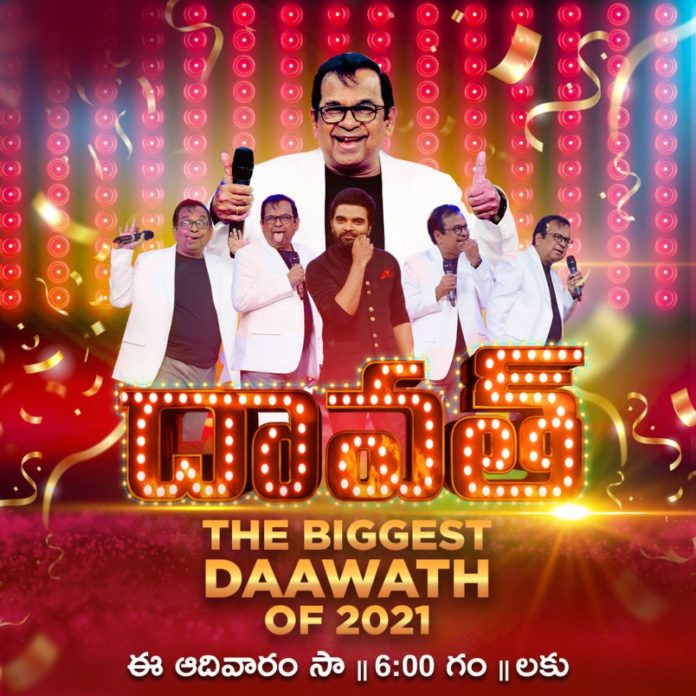 While everyone across the world gears up to ring in 2022 with a mega New Year bash, Zee Telugu has planned the biggest Daawath for its ardent viewers. Prior to the New Year, the channel is all set to host a grand celebration and no party is complete without a scrumptious meal, right? With that thought in mind, the channel is planning something never-heard-before. It will be an unimaginable feast for everyone’s eyes as Zee Telugu brings the house down with their special program – ‘Daawath’ on 26th December from 6:00 PM onwards.

We all know how every region has its unique food as well as dining habits that are ingrained in its culture and keeping everyone’s palate in mind, Zee Telugu is all set to present a unique three-course meal for its viewers during its mega ‘Daawath’ celebrations. The special, one-time program will have the most sought-after faces from Television and Tollywood, who will bring your evening alive through some enchanting performances.

For starters, ‘Daawath’ will see the channel’s most cherished anchor Pradeep Machiraju take to the stage and welcome all the Television and Tollywood stars at this exceptional event. However, the host will surprise everyone when he introduces Padma Shri Brahmanandam as the special guest of the evening. The Comedy King of Telugu Industry will be the ‘plat du jour’ of ‘Daawath’ and he will ensure he stirs up the audience with his wit and humor.

After the perfect start to this special ‘Daawath’ for its viewers, Zee Telugu will serve a fine platter of some mesmerizing and eye-catchy appearances, acts and performances by our Television and Tollywood as the main course. The dynamic couple – Nagababu and Padmaja will turn heads as they grace show along with Ali and his wife Zubeda. While Nagababu and Padmaja will set couple goals as they reveal intricate secrets about each other, Ali will surprise one and all as he will sing a song along with Revanth and dedicate it to Zubeda. Niharika Konidela, Vishwak Sen and Varun – Vithika will also make dazzling appearances, but it will be the enchanting acts by the celebrities which will truly take this treat to a whole new level.

Last but not the least, a special dance tribute to Brahmanandam and Ali, followed by Niharika’s surprise Pradeep will be served as the dessert at Zee Telugu’s special ‘Daawath.’ The special program truly aims to entertain one and all and make everyone’s festive celebrations grander than ever!

So, do not miss this mega festive celebration full of dance, fun, laughter, and entertainment during Zee Telugu’s New Year Special ‘Daawath’ which airs on Sunday, 26th December, 6:00 pm onwards!