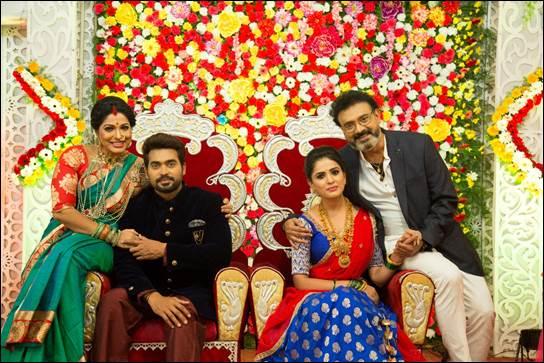 Over the last half decade, Zee Telugu’s Muddha Mandaram has been among the top shows in the Telugu Television Industry and now the much-talked about show is all set to say goodbye to its viewers. The family drama starring Haritha, Pawan Sai and Thanuja Gowda in lead roles is set to go off air on 27th December 2019.

Produced by Annapurna studios, the first episode which premiered 5 years ago, garnered eyeballs with its compelling story line and strong characterization. The show encapsulates the story of a strong-willed and stubborn woman, Akhilandeshwari, her elder son Deva, and his love story with Parvati, their help. This popular show had reached a novel milestone earlier this year by completing 1500 episodes and has also been remade into various languages like Tamil, Malayalam and Kannada.

Since its launch, Muddha Mandaram has garnered a huge fan base in the Telugu market. Audiences have fondly adored and loved the on-screen chemistry between the lead characters Parvathi and Deva, who reincarnated as Soundarya and Abhinandan. The show was also widely popular among mothers, owing to their strong connect with Akhilandeshwari’s character and her compassion towards her son.

Speaking on the show’s wrap-up, an emotional Thanuja Gowda who plays the role of Soundarya shares, “Every fairy tale has a happy ending, so does mine! Muddha Mandaram has been nothing less than a dream come true for me, right from the very first promo to the entire journey of Parvathi and Soundarya on the show, everything has been totally outstanding. The show has given me immense recognition and love. My heartfelt thanks to my director to whom I presented the ‘Best Director’ award. I will definitely miss the show, entire cast and crew.”
Commenting on his stint on the show, her co-actor Pawan Sai says, “5 years, Over 1580 episodes, and Infinite love. It’s difficult to contain the myriad of emotion running inside me and yet words elude me. Muddha Mandaram for me is a pure sign of family attachments and emotional bonding followed by responsibilities. I take the liberty to say this on behalf of the entire cast and crew, that we gave it our all. There were no half measures. All I feel right now is overwhelming gratitude for all the lives who collaborated on this epic journey and the ones embraced this as your own.”
Tune into the final episode of Muddha Mandaram at 3 PM on December 27th only on Zee Telugu and Zee Telugu HD.

With a balanced mix of content and programming options, Zee Telugu is one of top Telugu GEC channels in Andhra Pradesh and Telangana. Zee Telugu is well connected across all cable and digital platforms and also available on ZEE5.
To ensure you do not miss out on your favourite Zee Telugu shows, choose the Zee Prime Pack that includes Zee Telugu, and Zee Cinemalu alongside 7 other top channels of the Zee Network that cater to the daily entertainment needs of your entire family at Rs. 20 per month only. For further information, contact your DTH or Cable operator.