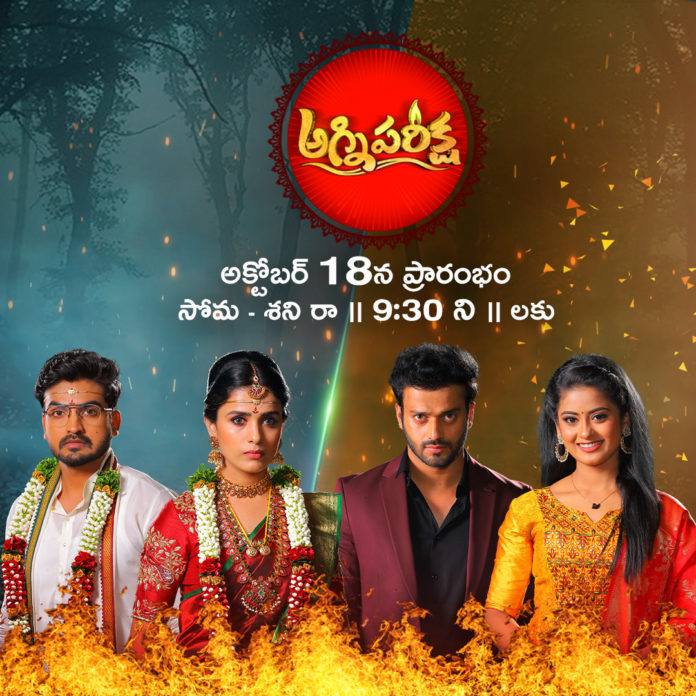 The purity of love can outshine the gleam of evilness and revenge. But when revenge is the sole driving force, how far is one willing to go? This will come to the fore in Zee Telugu’s all-new family drama show ‘Agnipariksha’ – a unique story that reiterates the power of a true and pure heart in transforming hatred to love. Bringing together a stellar cast, including actors Thanuja Puttaswamy, Akarsh Byramudi, Maahi Gouthami, Navin Vetri, and Prabhakar, the show highlights the journey of two sisters compelled into a loveless relationship. The show will emphasize the conflicting emotions of blazing love and brutal revenge. Agnipariksha will premiere on 18th October, aired every Monday to Saturday at 9:30 PM only on Zee Telugu.

Set in Hyderabad, the tale revolves around two sisters, Radhika (Thanuja Puttaswamy), Priyanka (Maahi Gouthami), and their father (Prabhakar), who is against love marriages. Radhika, an obedient, graceful, and kind girl, loves her longtime friend Amar (Akarsh Byramudi), who loves her back unconditionally. However, due to destiny’s play, Kailash (Navin Vetri) enters into the life of Radhika, changing the dynamics of her relationship with Amar. Priyanka, the younger sister to Radhika, is an energetic girl. Her life will take a 360-degree turn with her sister’s change of relationships. The gripping plot, theatrical characterization, and intense performances make Agnipariksha a roller coaster ride of emotions as Radhika, Priyanka, Amar, and Kailash meet at crossroads, creating the sense of anticipation on the twists and revelations that will transform equations among the characters at every stage.

Akarsh Byramudi, who plays the character of Amar, says, “I have always believed in experimenting as an actor, and I found Amar’s character very promising. A layered character, Amar is a complex but interesting and intriguing person. I’m grateful and delighted to be working with Zee Telugu once again and connect with the audience through this new project. I hope that we reach remarkable heights with this show.”

Will love triumph over revenge and hatred? Watch ‘Agnipariksha’ see how the story unfolds, starting from 18th October 2021 every Monday – Saturday at 9:30 PM only on Zee Telugu.

To ensure you do not miss out on your favorite Zee Telugu shows, choose the Zee Prime Pack that includes Zee Telugu and Zee Cinemalu alongside seven other top channels of the Zee Network that cater to the daily entertainment needs of your entire family at Rs. 20 per month only. For further information, contact your DTH or Cable Operator.

Zee Telugu is the Telugu General Entertainment Channel of Zee Entertainment Enterprises Ltd (ZEEL). Launched on 18th May 2005, Zee Telugu was the first entrant from Zee bouquet to enter South India. Zee Telugu offers a variety of shows that cater to the entertainment preferences of over 75 million Telugu audiences across India every week. From fiction shows to reality shows and talk shows, the channel has multi-genre offerings and is widely accepted as the ultimate entertainment destination. Zee Telugu creates unique content by offering fiction shows with amazing storylines, state-of-the-art non-fiction shows & events with extraordinary formats, and acquires satellite rights to some big Tollywood movies that appeal to viewers across age groups.