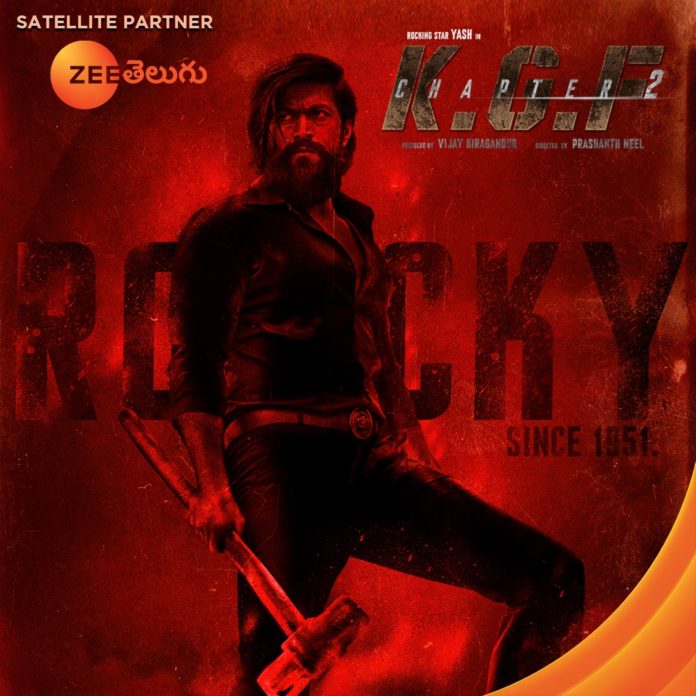 KGF Chapter 1 premiered in over 100 theatres across 50 international locations and surpassed the Rs 100 crore mark in terms of worldwide collections within less than a week of its release. The action blockbuster of the year became the highest-grossing Kannada movie to ever hit the screens. The sequel, KGF Chapter 2 is set to deliver a higher entertainment quotient with the teaser earning over 208 million views digitally, including trending at #1 on Twitter and YouTube. This mega entertainer will premiere on Zee Kannada, Zee Tamil, Zee Telugu and Zee Keralam in the respective languages post its theatrical release.

Speaking about the acquisition, Siju Prabhakaran, Cluster Head – South, Zee Entertainment Enterprises Limited shared, “We are thrilled to bring the most anticipated movie in the country to every screen in the South through the TV acquisition rights of KGF Chapter 2 in all 4 Southern languages. This is yet another firm step we have taken as a brand to keep our promise to the audience and provide the best of entertainment in the comfort and safety of their homes. With this association, we are glad to present our viewers with quality content that is larger-than-life and appeals to diverse audiences across the world and enhancing our connect with them. We are certain that KGF-2 will shatter all records and create history in TV ratings and will add another feather in the cap for ZEE channels in the south region.”

Keeping the promise of entertaining the audience with the best of the content, Anuradha Gudur, Telugu Cluster Head, said, “At ZEE, every decision we take is from a consumer-first perspective. Stories that are close to our land have often found an audience not only in our market but across India, and we are delighted to further take a step into the acquisition of KGF Chapter 2 in all 4 South languages, including Telugu. We are excited to further deepen and strengthen our association with nationally recognized blockbuster films. Keeping in tune with changing aspirations and expectations of audiences, KGF2 is going to stand out in our existing movie library. Content variety, modernizing the entire packaging and quality of the movie through our channel is a sign of commitment to the Telugu viewers, globally. With an exemplary cast and a story that is going to make a mark, we look forward to continuing to entertain our viewers.”

The success of KGF-1 has put the Kannada Film industry on the national map and the movie went on to become a brand by itself.

Commenting on the film acquisition, Director Prashanth Neel said, “I am delighted that the satellite rights of KGF Chapter 2 have been secured by ZEE for southern languages. I value this association with ZEE and believe with their ever-expanding network we will be able to showcase KGF Chapter 2 to a larger audience.

I am thrilled with the response given to the teaser of the movie. I am certain the movie will live up to the high expectations and will write a new chapter of KGF’s legacy. I assure you all that it will be worth the wait!”

Talking about the association, Producer Vijay Kiragandur of Hombale Films said, “We are pleased to announce that we have associated with ZEE’s South Cluster for the satellite rights of our magnum opus KGF Chapter2, for the southern languages. With our partnership with ZEE’s South cluster of channels, we are confident to expand our reach to a wider audience. At Hombale Films, we strive to produce entertaining and compelling content shaped to cater to a global audience, while adhering to our Kannada roots.”

After the record-breaking success of KGF Chapter1, the expectations from KGF Chapter2 are enormous. The trailer of the film further added to the buzz of the action thriller.

“With KGF Chapter2, we have tried to enhance the spirit & scale of KGF legacy to provide the best cinematic experience for our fans. We hope to create and witness a greater euphoria with our grand release. And we are confident that KGF Chapter2 will be showered with the same love & affection and will script a new benchmark in the film industry!” added Kiragandur.

Talking about what KGF and this association means to him, Rocking Star Yash said “KGF 2 holds a very special place in my heart. My director Prashant Neel, producer Vijay Kirgandur and I have a vision that has been very different and approachable, and we are grateful that the audiences believe in the work we believe in. The love and support from the audiences has been immense and I am glad that the film from the region I hail from has managed to bring oneness amongst our audiences pan India. I am elated to associate with ZEE’s South cluster of channels who have been entertaining Indian audiences since its inception. I would like to extend my gratitude to ZEE and wish them the best. I hope we continue to have successful associations for our future projects”.

With a balanced mix of content and programming options, Zee Telugu is one of top Telugu GEC channels in Andhra Pradesh and Telangana. Zee Telugu is well connected across all cable and digital platforms and also available on ZEE5