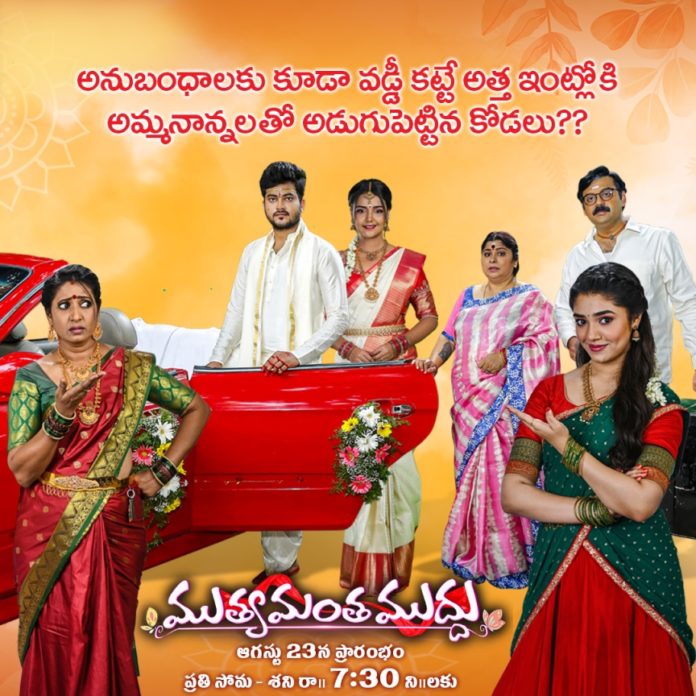 Zee Telugu, a leading General Entertainment Channel for Telugu viewers, engages and entertains viewers with its distinguished bouquet of serials and non-fiction series. The network’s diverse offering positions it as a channel synonymous with entertainment. Having established as a powerhouse of holistic and purpose entertainment, the channel is all set to make an exciting new addition to its existing bouquet of shows with the launch of Muthyamantha Muddu. The channel will now capture the journey of Geetha as she takes definitive steps to take care of her parent’s post-marriage and live under the same roof as her in-laws. Muthyamantha Muddu will premiere on 23rd August and air Monday – Saturday at 7:30 PM only on Zee Telugu and Zee Telugu HD.

Commenting about the show launch, Anuradha Gudur, Telugu Cluster Head, said, “In the past few months, we have introduced some of our biggest properties to provide wholesome variety entertainment to our viewers. Continuing the high momentum, we are excited to launch Muthyamantha Muddu, a show that is synonymous with the channel’s ethos. The show will feature myriad shades of characters that are nuanced and relatable. We had a great time conceptualizing the show and are certain that the journey of each of these characters will keep the audience intrigued and engrossed.”

Tollywood’s rising star Krithi Shetty is associated with Muthyamantha Muddu as the show Brand Ambassador. The promo and title song that features her has generated a great deal of buzz since the launch. The title song of the show sung by Jithin Raj and choreographed by Vijay Master and Sagar Narayana has penned the lyrics that have been composed by David Selvam.

Set in the backdrop of Nellore, Geetha (Nisha Milana) is a Tamilian who is the youngest of the two siblings. She is rooted in her values and principles, but she is a present-day girl, ambitious, and stands with the thought of living with her parents and in-laws under one roof. On the other hand, Kanaka Ratnam (Amani), a stingy and sharp-tongued woman from a Telugu family, belongs to the old school of thought, is seeking a girl who can bring hefty dowry for her son Govind (Siddharth). However, Govind falls in love with Geetha and is ready to accept her with her parents. As Geetha and Kanaka Ratnam’s lives get interwoven and their ideologies clash, thus begins Geetha – Govind’s journey of discovering an enhanced life and relationships.

Amani, the versatile actress, will debut in Television as Kanaka Ratnam said, “Having explored the world of Cinema, I’m thrilled to make my television debut with Zee Telugu. Muthyamantha Muddu will take viewers through a beautiful and warm narrative of a love story. I hope that mine and the ardent fans of the channel will follow my journey and show immense love and support.”

The show also features versatile actors such as Meghana Raami, Vasu, senior comedian actress Sri Lakshmi among other stellar casts. The cherry on the cake is the screenplay and dialogues of the show, written by Rasool, who has scripted the channel’s sensational hit show Varudhini Parinayam.

Join Geetha and Govind on their journey starting 23rd August, every Monday – Saturday at 7:30 PM
only on Zee Telugu and Zee Telugu HD.

About Zee Telugu:
Zee Telugu is the Telugu General Entertainment Channel of Zee Entertainment Enterprises Ltd (ZEEL). Launched on 18th May 2005, Zee Telugu was the first entrant from Zee bouquet to enter South India. Zee Telugu offers a variety of shows that cater to the entertainment preferences of over 75 million Telugu audiences across India every week. From fiction shows to reality shows and talk shows, the channel has multi-genre offerings and is widely accepted as the ultimate entertainment destination. Zee Telugu creates exceptional content by offering fiction shows with unique story-lines, state-of-the-art non-fiction shows & events with extraordinary formats, and acquires satellite right to some of the largest Tollywood movies that appeal to viewers across age groups.
With a balanced mix of content and programming options, Zee Telugu is one of top Telugu GEC channels in Andhra Pradesh and Telangana. Zee Telugu is well connected across all cable and digital platforms and also available on ZEE5