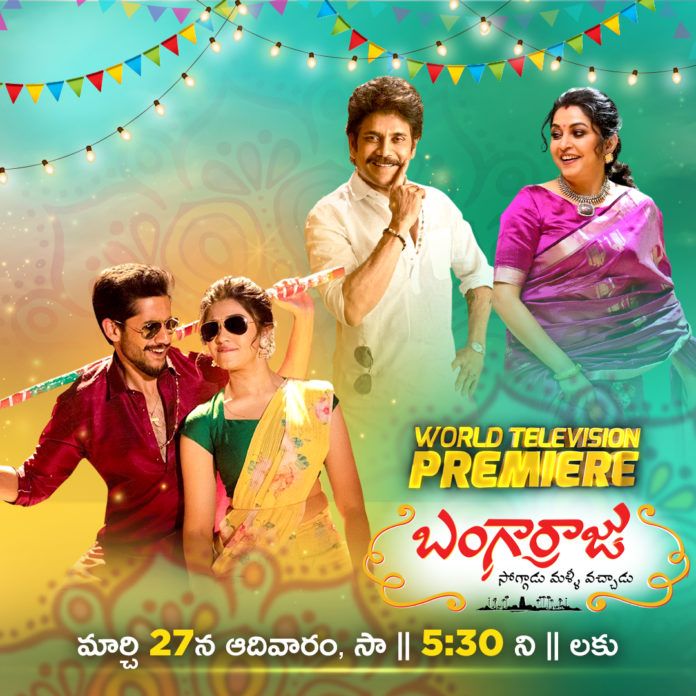 Hyderabad, 23rd March: This weekend will be full-on entertainment as Zee Telugu brings the most adorable father-son duo pair to your TV screens with the channel premiere of ‘Bangarraju’ on 27th March at 5.30 PM. Zee Telugu will get the audience to witness a unique mashup song that was not showcased in theatres and the OTT platform, making it an exclusive offering for the channel’s viewers. The channel has engaged with Music director Anup Rubens to curate and feature in this song.

Emerged as the much-awaited blockbuster of the year, the film has elements of drama, top-notch action, comedy, and romance seamlessly woven into the story – making it a complete entertainment package. Under the direction of Kalyan Krishna Kurasala, the film stars King Akkineni Nagarjuna and Akkineni Naga Chaitanya, along with Ramya Krishnan and Krithi Shetty, is ready for the premiere. To engage the audience like never before, Zee Telugu provided fans of Bheemvaram to express their undying love for Nagarjuna and Naga Chaitanya. The idea of Bullet Bike Rally in the costume of Bangarraju has seen a deluge of fans. Their enthusiastic participation depicted the sheer love for their idols and enabled the channel to create a rather interesting record. The one-day activity on 20th March witnessed 70+ bikers and an overwhelming response from ardent fans.

To unbeknownst, Bangarraju is the sequel of ‘Soggade Chinni Nayana’. In continuation with the film, Sathemma (Ramya Krishnan) also reaches heaven after her demise but sends back Bangarraju (Nagarjuna) to earth. She asks Bangarraju to set up their grandson Chinna Bangarraju’s (Naga Chaitanya) life on the right track where he doesn’t feel lonely anymore. How Bangarraju sets everything in order and will he get Chinna Bangarraju to get married to Naga Lakshmi (Krithi Shetty) forms the story.

Being a perfect mix of entertainment, action and thrill, the world television premiere of Bangarraju will make the ideal family viewing experience on this Sunday, 27th March, at 5.30 PM, only on Zee Telugu.