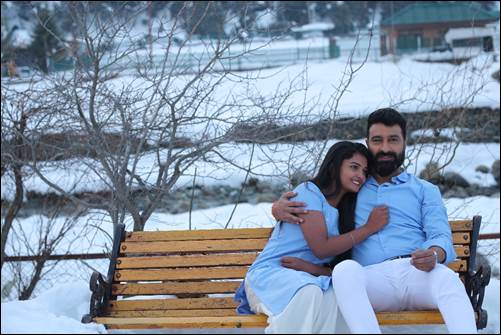 A Story Of An Unconditional Love Begins On 10th February
Arya Vardhan is a 40-year-old dynamic bachelor and an astute businessman; whose world revolves around his family and work. Anu, on the other is a 19-year-old fun-loving, free-spirted girl whose thirst for living it up often compromises any semblance of focus in life or any serious career aspirations. What do they have in common? Little, perhaps, except that they are destined to fall in love with each other. Zee Telugu’s brand-new prime time offering ‘Prema Entha Madhuram’ brings viewers an unconventional romance that transcends the barriers of age, life stages and background.

In line with the channel’s brand philosophy ‘Aarambam Oka Aduguthone’, the show questions if people really need a license to love? Do lovers need an external approval from society to feel for one another? Should factors like cast, creed, monetary backgrounds and, in this case, age define who should love whom? Produced by South Indian Screens, Prema Entha Madhuram will premiere on 10th February at 9 PM, every Monday to Friday, only on Zee Telugu and Zee Telugu HD.

The series was applauded for the title song, which was shot in Pahalgam, Kashmir. For the first time in the Telugu television industry, Zee Telugu’s Prema Entha Madhuram title track caller tune is out for subscription on Airtel, Vodafone, Idea, and BSNL on popular demand by the ardent audience. This popular tune will also be released on OTT platforms soon.

Superstar Mahesh Babu joined hands with Zee Telugu for a unique concept video which already garned much accolades from the fans of Prince and ardent viewers of the channel. The charming star shot with the cast of the show along with the famed Anchor Pradeep Machiraju.

The business-romantic drama boasts of a stellar star-cast including the popular actors Venkat Sriram as Arya Vardhan and Varsha HK as Anu. Set against the backdrop of Hyderabad, Prema Entha Madhuram chronicles the unique journey of Arya Vardhan and Anu, two strikingly different individuals hailing from diverse backgrounds fall in love irrespective of their substantial age difference. As their contrasting universes collide, will Arya Vardhan and Anu stand up against taboos and prejudice as they face the eternal question – ‘What will society say?’ Will the two muster the courage to admit their love?

Commenting on his character, Venkat Sriram says, “Aryavardhan is an unexplored character for me and for Telugu television. I am very thrilled to play this role. Hope the audience embraces my comeback with love!”

Commenting on her role, Varsha HK says, “Anu is very close to my heart and I and very happy that I got an opportunity to be a part of this new-age love story. I am sure the audience is going to love it. Fingers crossed though!

As the story progresses, viewers at multiple junctures will be posed with interesting questions about love and companionship. Will a love so intense bow down to the cognition of age differences? Or will braving societal stigma together empower Arya Vardhan and Anu as a couple?

To find out, embark on a journey of unconditional love with Zee Telugu’s Prema Entha Madhuram premiering on 10th February, every Monday to Friday, at 9:00 PM only on Zee Telugu and Zee Telugu HD.