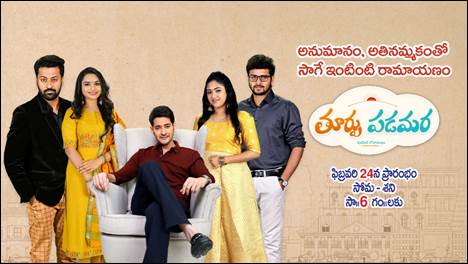 Life is all about the friendships you make and the journey that you embark on with your loved ones. But what happens when the two find themselves entwined in the complexities of insecurities, mistrust and opposing value systems? Untangling this unique bond will be the central theme of Zee Telugu’s upcoming fiction drama, Thoorpu Padamara. Starting 24th February at 6:00 PM, the show stars Yamini, Vinay, Jaya Kavi and Pranay in lead roles.

Earlier this month, Superstar Mahesh Babu joined hands with Zee Telugu for a unique concept video that was widely loved and appreciated by the fans of the Prince as well as the ardent viewers of the channel. The video also featured Yamini and Jaya Kavi along with the famed anchor Pradeep Machiraju.

Produced by Palle Prema Sagar Reddy, Thoorpu Padamara chronicles the life of Shruti and Laya. Though they are best friends, Shruti and Laya are as different as chalk and cheese. Laya played by Yamini, hails from a middles class family and believes that positivity is the right approach to life. On the other hand, Shruti, played by Jaya Kavi, comes from an opulent background and has a very pessimistic outlook on life. The story unravels when Laya and Shruti are married off to two brothers who also have contrasting personalities. Over time, the show will trace the journey of four contrasting personalities who are joined in an unbreakable bond.

Commenting on her comeback with Zee Telugu, Yamini says, “Thoorpu Padamara is my fourth show with Zee Telugu, and the range of performance styles that I have been able to explore with this channel, has been really vast and extraordinary. Which has made me do intensive behind-the-scene homework to show variations from each character that I’ve taken up. The unique concept of the show and the incredible experience of working with these teams, which feels like a family to me, has been the biggest driving force for me to agree to do this show, and me getting closer to the audience.”

How the two friends navigate through the hardships that befall them and find happiness in their marriages forms the crux of the story.

Join Shruti and Laya on their journey from 24th February, 2020 at 6:00 PM only on Zee Telugu and Zee Telugu HD!