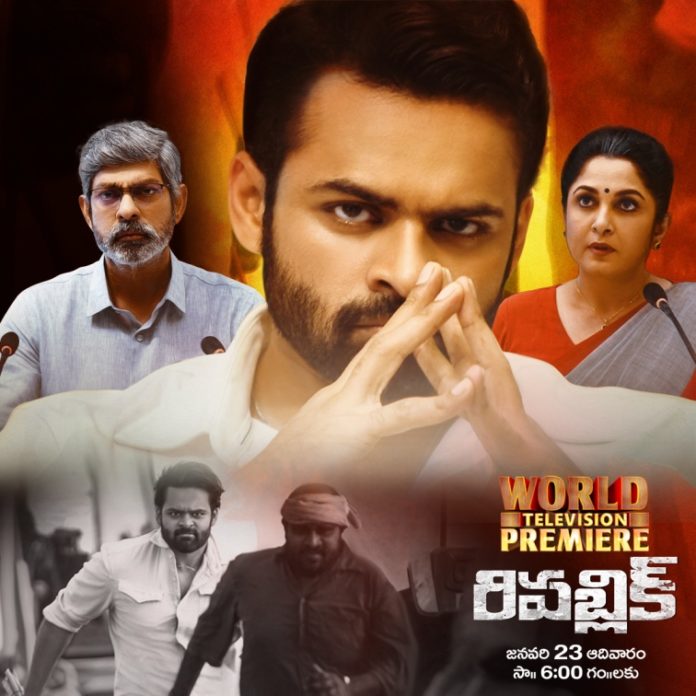 After enthralling its audience with an exciting line-up of shows during the festive celebrations of Sankranthi, Zee Telugu is all set to continue its Entertainment Fiesta as it presents the World Television Premiere of Republic on 23rd January at 6 PM. A decade after making a phenomenal debut, director Deva Katta is back with another political thriller – Republic, which shines the spotlight on the harsh realities of the system we live in. The critically acclaimed film by the pundits, celebrities and ardent fans discusses important societal issues like rigged elections, corrupt governments, and caste prejudice, which the audience will surely relate with!

Deva Katta, the director of the film shared, “This Sunday, January 23, at 6 pm, ‘Republic’ movie will greet everyone on television screens. The film resonates with our thoughts on the current society, and I can say it has inspired the majority of the people. The film tells that the Truth breaks the shackles we live in, and then it becomes our driving force to move forward. I hope that this movie will be well-received by all the viewers.”

Republic revolves around Abhiram (Sai Dharam Tej), who has a bright future at MIT. However, he chooses to stay back in his hometown Eluru and becomes a public servant like his father, Dasarath (Jagapathi Babu). He works hard and becomes a district collector; however, he soon discovers how the Thelleru water body is rotting. The farmers, whose land surrounds the water body, also kill themselves because they see no future. On the other hand, we have Minister Vishakha Vani (Ramya Krishnan), a businesswoman with her agendas, and she expects everyone to fall in line, even Abhiram. But our hero is not someone who will bow down to pressure. He encounters Myra Hanson (Aishwarya Rajesh), an NRI looking for her missing brother – Varun, as he continues his investigation. He comes to know how Varun was a scientist who worked on the Thelleru water case and had uncovered something significant. But will Abhiram be able to find the truth and help the farmers?

While the movie’s plot will keep you hooked, wait till you witness Sai Dharam Tej and Ramya Krishnan’s killer performance. Even more interesting is that not even one supporting character is black or white. Every character who Abhiram calls out for being corrupt has their backstory for being the way they are. Find out all the realities in the riveting drama.

Witness this incredible tug of war between Abhiram and Vishakha in Republic only on Zee Telugu on 23rdJanuary at 6 PM.