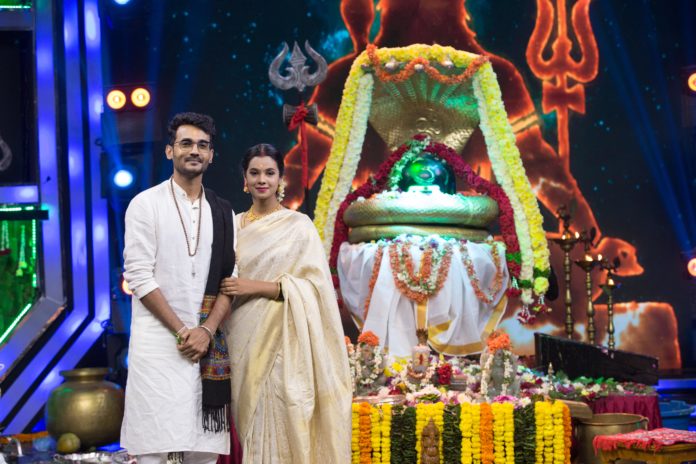 Zee Telugu one of the Telugu leading channels is set to offer its viewers a unique, spiritual experience on the auspicious day of Mahashivratri this year. The channel is thrilled to telecast relevant ambitious content with ‘Shivathatvam’ in Arogyame Mahayogam at 8:30 AM on 11th March followed by Maharudram Mahashivam starting at 10:30 PM and Uma Maheshwaram Kalyanam on 12th March at 7:30 AM only on Zee Telugu and Zee Telugu HD.

Mahashivratri, the festival of overcoming darkness and ignorance in life is often observed by remembering Lord Shiva and chanting prayers. Zee Telugu has laid the path to a spiritual journey where Dr Manthena Satyanarayana Raju will be sharing his knowledge about Shivratri itself, fasting and jagaran. Singer Saketh along with contestants of SRGMP 13th season will perform onShiva Tandava Stotram and Bilvashtakam followed by abishekam, 12 replicas of the jyorirlingam, for their ardent viewers. Television’s most rooted for couple, Anusha Hedge and Prathapare going to be a part of the service with the audience.

On 12th March, Devishri Guruji and Vakkantham Chandramouli will be part of the Uma Maheshwaram Kalyanam, which is observed for the longevity and love between the married couple, drawing a parallel to the lives of Lord Shiva and Goddess Parvathi.

Don’t forget to catch these special hours of ‘Shivathatvam’ in Arogyame Mahayogam at 8:30 AM on 11th March, Maharudram Mahashivam on 11th March at 10:30 PM and Uma Maheshwaram Kalyanam at 7:30 AM on 12th March only on Zee Telugu and Zee Telugu HD.