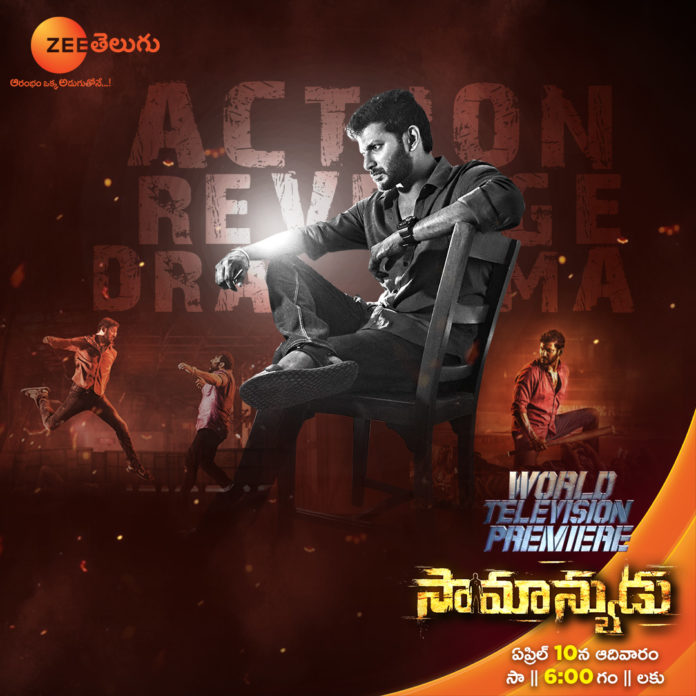 Hyderabad, 5th April: This Ram Navami, Zee Telugu is all set to raise the entertainment quotient with a story of a commoner who stands against all odds in life. After presenting Bangarraju, the channel is set to make your family’s weekend delightful as it airs the World Television Premiere of Saamanyudu. The movie will be telecasted this Sunday, 10th April, at 6.00 PM and it will take you on a topsy-turvy journey full of mystery and action. Written and directed by Thu Pa Sharavana, Saamanyudu stars Vishal and Dimple Hayathi in lead roles, while Yogi Babu, Baburaj, and Raveena Ravi, Marimuthu and Tulasi are seen in prominent roles.

For the uninitiated, Saamanyudu revolves around the story of Porus (Vishal), who wants to serve India by joining the Indian police force. He dreams of becoming a cop and getting married to the love of his life – Mythili (Dimple Hayathi). However, on an unfortunate day, his sister, Dwaraka, gets murdered. With the murder taking place under strange circumstances, Porus starts investigating the case in his own way and unravels some very dark secrets. He learns how some top politicians are also involved in his sister’s death, but they’re trying to pin the blame on someone else. How he manages to bring the culprits into the light and get justice forms the crux of the story.

Vishal, who is known for playing intense roles, truly gets into the skin of his character in Saamanyudu and he will enthrall all the viewers with his phenomenal performance. The action sequences will also give the audience an adrenaline rush, while Yuvan Shankar Raja’s music will refresh everyone’s mood. All in all, Saamanyudu will entertain everyone in your family, and you surely cannot miss it!

To watch this action-packed movie, tune in to the World Television Premiere of Saamanyudu on 10th April at 6.00 PM, only on Zee Telugu