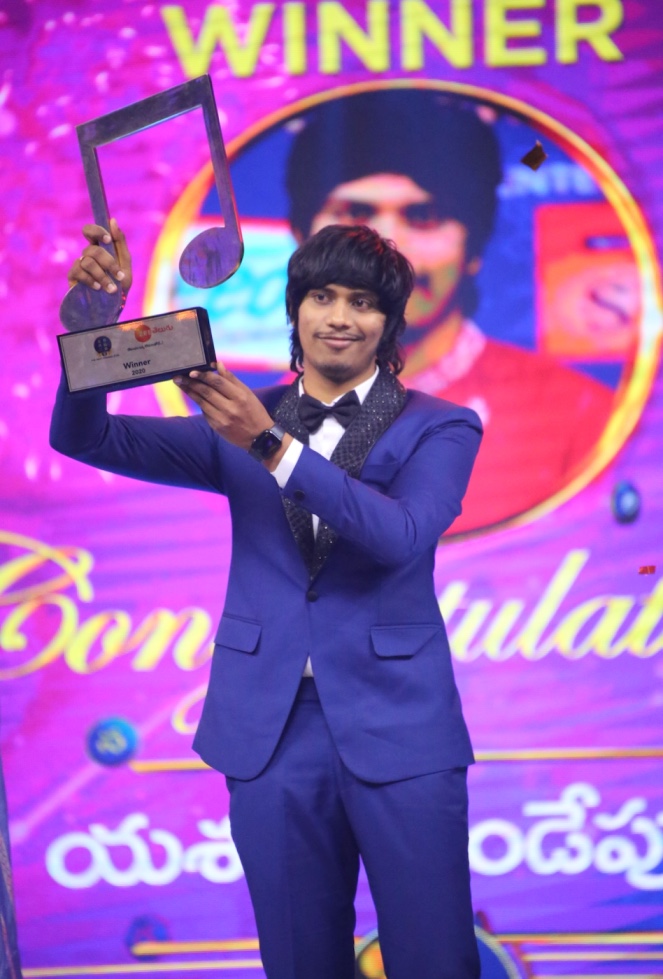 The most eagerly awaited musical grand finale of the year, Sa Re Ga Ma Pa (SRGMP) – The Next Singing Icon announced the winner of the season, in attendance of some of the biggest names in the industry. For 30 musical weeks, the Telugu audience across the world obsessed over each one of these contestants. Millions tuned-in every week to follow the journey, social media was flooded with conversations and the viewers showered their support making this a unique season of Sa Re Ga Ma Pa.

The show unleashed exceptional entertainment where the contestants fight tooth and nail to win the battle. Every performance resulted in making it stiff competition amongst all while overcoming all odds made this the battle of the year. Yasaswi Kondepudi emerged as the ultimate winner and was conferred with a trophy and prize money of 5 Lacs and Bharath Raj was titled the first runner-up.

Host Pradeep Machiraju in his best element turned the Grand Finale into a memorable one as he welcomed a volley of guests including Sid Sriram, Rana Daggubati, Baba Sehgal, Zoya Hussain, Singers Sunitha and Kalpana. The season concluded with a power-packed evening compromiseing of performance acts by the finalists, a LIVE performance of Sid Sriram.

Commenting on the enormous success of Sa Re Ga Ma Pa – The Next Singing Icon, Anuradha Gudur – Telugu Cluster Head said, “Sa Re Ga Ma Pa is a brand in itself. This platform has always helped us identify extraordinary singers & bring them to global musical fans and making wonderful careers in the film industry. The pandemic posed many challenges this season for us, but we overcame them in every sense and delivered an euphonious season. I thank every person who has put faith in us that helped in making this show a success. Heartiest congratulations to Yasaswi Kondepudi and to all the contestants who gave a tough fight.”

Title winner, Yasaswi comments, “The feeling of being declared as the winner of the Sa Re Ga Ma Pa – The Next Singing Icon is yet to sink in while I feel honoured. I was true to myself throughout the show and gave my best. As I recount the moments, I must add that this wouldn’t have been possible without the never-ending support and love from the esteemed judges, my mentors, fellow contestants and the public who helped turn my dream into reality. I’m taking back the trophy home, and with it, some fond memories and musical guidance that I will cherish my whole life.”