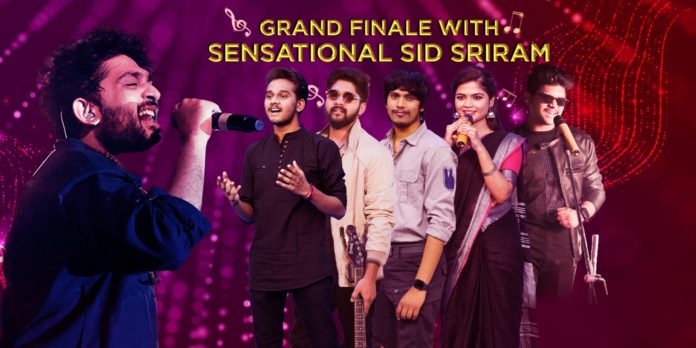 T’s have been 29 weeks for the young participants of the SRGMP – The Next Singing Icon, to reach to finale phase. Media outlets from the Telugu states are throwing around words like ‘soaring’ and ‘Rising superstars,’ and all of it feels surreal. After all, the show started with 19 contestants. Five youngsters, exceptionally talented, are all set to entertain the audience LIVE this Sunday, i.e., on 21st March at 6 PM only on Zee Telugu and Zee Telugu HD.

The prestigious musical grand finale will have the who’s who of the Tollywood fraternity come together and cheer up with finalists and honor the most deserving. The sensational LIVE finale will witness remarkable film and music personalities Sid Sriram, Rana Daggubati, Zoya Hussain, Baba Sehgal, Singer Kalpana, Singer Sunitha among others.

The fans are excited to know who will lift the trophy and take the prize money home from the top finalists of the season, i.e., Bharath Raj, Pragna Nayini, Pavan Kalyan, Venkata Chaitanya, and Yasaswi Kondepudi. As the contestants are gearing up for the finals and putting their best foot forward to give the best performance, the current music sensation Sid Sriram will perform LIVE to enthrall the viewers. Singer Sunitha and Kalpana, and Baba Sehgal are going to capture the audience’s hearts with top-notch songs. The singers such as Geetha Madhuri, Ramya Behra, Krishna Chaitanya, and the stellar mentors are going to be adding glory to the finale feast.

Sa Re Ga Ma Pa – The Next Singing Icon proved to be a great platform to unleash the Telugu states’ musical talent. Such an exceptional finale will be judged by Koti, S.P. Shailaja, and Chandra Bose while Pradeep Machiraju hosts the jamboree.

Tune into the culmination of the musical journey LIVE on March 21st at 6 PM only on Zee Telugu and Zee Telugu HD.