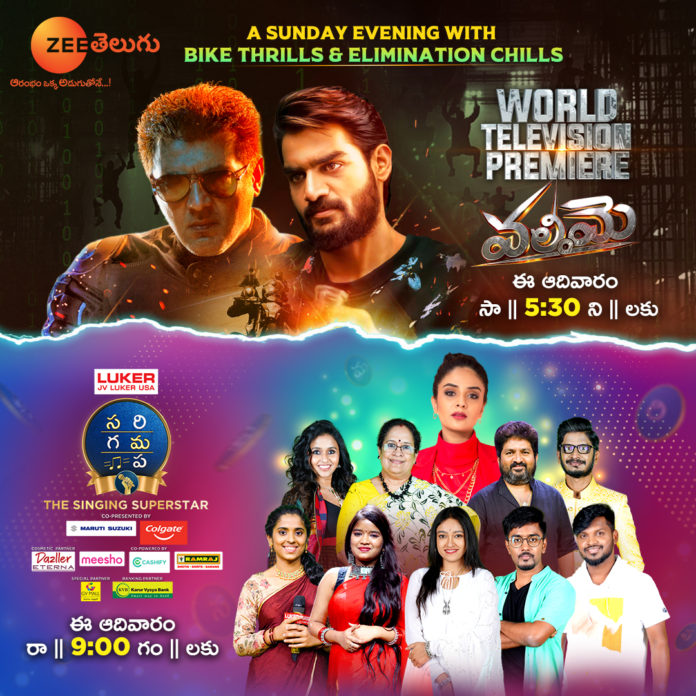 Hyderabad, 19th April 2022: After presenting exciting world television premieres and fun-filled reality shows, Zee Telugu has planned to make your Sunday even more exciting this weekend. Keeping its audience’s taste and sentiment in mind, the channel is set to air the world television premiere of the popular action-thriller – Valimai – on 24th April, at 5:30 pm. But that’s not it! To keep every family member hooked to their television sets, Zee Telugu is also telecasting an entertaining, exciting, and nail-biting episode of Sa Re Ga Ma Pa – The Singing Superstar at 9.00 PM, this Sunday.

Valimai, the popular action-thriller directed by H Vinoth, will kick off your fun-filled Sunday on Zee Telugu. Starring Ajith Kumar, Kartikeya Gummakonda, Huma Qureshi and Gurbani Judge in lead roles, the movie revolves around ACP Arjun (Ajith Kumar), a police officer who can go to any extent to keep the city safe. Naren a.k.a. Wolfranga (Karthikeya Gummakonda), on the other hand, wants to ruin the lives of all the bankrupt and unemployed youngsters. Arjun and Naren try to outwit each other as they engage in some truly epic mind games. With several twists and turns in the tale, viewers will surely be at the edge of their seats.

After an exciting movie, Sunday’s episode of Sa Re Ga Ma Pa – The Singing Superstar will continue the entertainment quotient for the audience. While viewers have a gala time during the fun filled girls v/s boys segment during the show, popular lyricist Kasarla Shyam will steal the limelight as he appears as a special guest and enthralls everyone with his rendition of DJ Tillu’s song. What’s more is that Sunday will also witness an elimination, so expect all the singers to put their best forward in a bid to make it to the next round. It will truly be a nail-biting episode with a possibility of a shock elimination!

Get ready for an entertaining Sunday as the World Television Premiere of Valimai airs at 5:30 PM and the exciting episode of Sa Re Ga Ma Pa – The Singing Superstar airs at 9:00 PM, only on Zee Telugu.