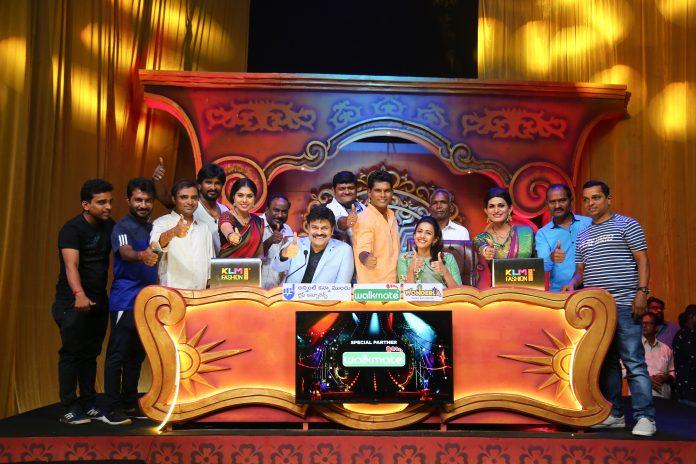 Zee Telugu, the No.1 entertainment channel in Andhra Pradesh and Telangana, is known for curating unique and exciting format shows that continue to provide new experiences for every ardent viewer. Zee Comedy Show 2007, Zee Comedy Club 2011-12, Family Circus 2014, and Comedy Khiladilu 2017 are a few successful shows that have built a special place in the hearts of the Telugu audiences. Now presenting ‘Navvula Nights’, the channel promises to keep you in splits every Saturday and Sunday from 9:00 PM to 10:00 PM with ‘Local Gangs’, our much-loved show, and its latest addition, ‘Adhirindi’.

A reality talent hunt for the next generation of comedy stars, the cast of ‘Adhirindi’ went LIVE with a curtain raiser on Sunday, 15th December.  This is a brand-new show where comedy superstars, and you, the audience will get together every weekend to elect a new generation of comic geniuses. Tune-in for the first episode of ‘Adhirindi’ on 22nd December at 9:00 PM only on Zee Telugu and Zee Telugu HD.

Sameera Sherief will debut as the anchor for the unique show that includes the popular Nagababu as the judge or ‘shehensha’. The participants, selected from auditions, will be split into four teams which will each be led by Dhanraj, Venu, RP and Chandra, where they perform comical skits to amuse the ‘shehensha’. Adding to its uniqueness, the team members will receive the opportunities of being exclusively hand-picked by the said team leaders, for the first-time-ever in the history of comedy shows in South India. The selection criterion would include electing individuals possessing distinct dialects from across the State, embracing the wit that every dialect has to offer.

The show comprises of a missed-call campaign where every episode will consist of audience voting along with the judges’ points that determine the course of ‘Adhirindi’. Starting from the 4th episode, votes of the audience will be displayed and updated on the leaderboard on a weekly basis, however, the scores of the jury will only be unveiled in the finale of the show.

The very first episode will witness Nagababu’s daughter, Niharika Konidela as the walk-in judge. Heightening the entertainment quotient for the night, Raj Tarun made a special appearance for the promotions of his film Iddari Lokam Okkate, and performed in one of the skits that left the audience splits.

The champion of the show will be pronounced through a division of audience vote (50%) along with the votes of the judges (50%). The show guarantees to provide pure laughter and an enjoyable ride where we collectively embark on a journey of ushering in a new generation of comic sensations.