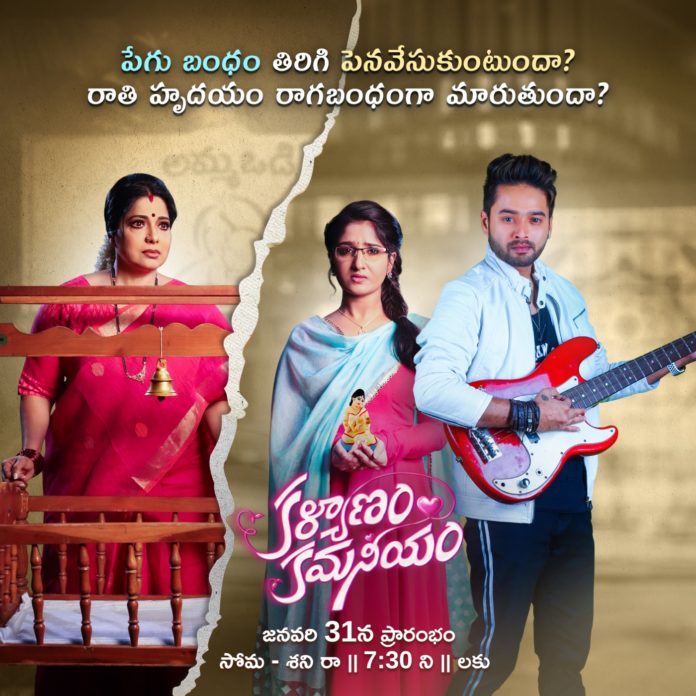 Hyderabad, 24th January 2022: ‘Ma’, ‘Amma’, ‘Mom’ are the first words that come out of our mouth whenever we are in trouble or pain or whenever we need something. This is because we know that our mothers will always protect us no matter what happens. Despite how distant, far or unavailable we may grow, our mothers continue to love and protect us throughout their lifetime. But not every child is blessed with a chance to be with their mother.  Some are separated by destiny, others by choice. But the longing to reunite gets stronger over time. Bringing a journey of a mother-daughter separated by fate and their attempt to reconcile and start over forms the narrative of Zee Telugu’s new show – Kalyanam Kamaneeyam. The show features Haritha as Seetha Ratnam, Singer Mano as Govardhan, Meghana Lokesh as Chaitra and Madhu as Viraj in the lead roles and will premiere on 31st January and air every Monday to Saturday at 7:30 pm only on Zee Telugu.

Having several layers to its story and various pivotal characters, every viewer will surely resonate with Kalyanam Kamaneeyam. In fact, every mother and daughter will relate to the situation Seetha Ratnam (Haritha) and Chaithra (Meghana Lokesh) find themselves in! Seetha Ratnam is a simple yet passionate woman who was separated from her daughters when they were young. She is a very helpful woman, and she even runs a home for destitute women. While she hopes to meet her daughters at some point in time, there is not much she can do about it as she has no clue about their whereabouts.

On the other hand, Chaithra and her sister come to know that their mother is still alive when their father (Singer Mano) is on his death bed. He reveals everything that happened that made Seetha Ratnam go away, leaving them shocked. While Chaitra takes the initiative to find their mother, she has no clue where to look for her. However, fate plays its card, and Chaitra happens to meet Seetha Ratnam, but little do they know that she is their long-lost mother. In a surprising twist, Rockstar Viraj (Madhu) stands against Chaitra due to Seetha Ratnam, further bringing them closer. But will Chaitra and Seetha Ratnam find out about their real relationship? And will Chaitra be able to win Viraj’s heart and change his behavior? This is something that will keep the viewers hooked to the show!

Haritha, who will be making her comeback to Zee Telugu after Muddha Mandaram, mentions, “It’s like a homecoming for me with Kalyanam Kamaneeyam. The show takes me down memory lane and cherishes the beautiful bond I share with my mother. We have often seen stories of mother and their children growing apart across movies and television shows. However, our show is unique as it does not start from the story of a happy family but the one where a daughter is longing for her mother and how she finally meets her one day. The journey and reconciliation between the characters is a heart-wrenching, endearing and relatable story that no one should miss. I hope the viewers like the show and shower us with a lot of love and affection.”

So, what are you waiting for? Witness Seetha Ratnam and Chaithra’s heartwarming journey in Kalyanam Kamaneeyam, starting from 31st January every Monday – Saturday at 7:30 PM, only on Zee Telugu