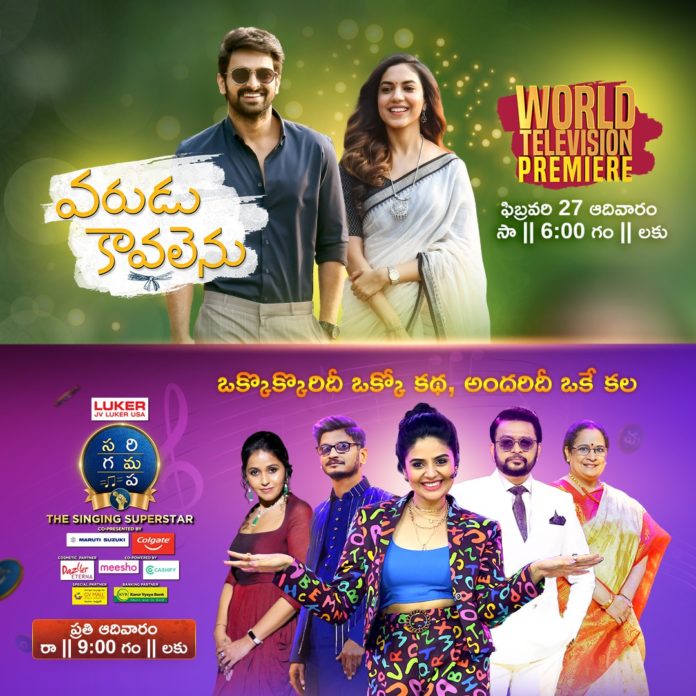 Hyderabad, 23rd February 2022: Since its inception, Zee Telugu has always strived at providing its viewers with wholesome entertainment. In fact, the channel recently launched a wonderful fiction show – Kalyanam Kamaneeyam, while also bringing to its audience a fresh new season of Telugu Television’s most popular singing reality show, Sa Re Ga Ma Pa – The Singing Superstar. After mesmerizing one and all with its new offerings, Zee Telugu is all set to make your Sunday even more entertaining this time around as it airs the World Television Premiere of the super-hit movie –‘Varudu Kaavalenu’ on 27th February at 6 pm. But that’s not all! At 9 pm, the first episode of Sa Re Ga Ma Pa – The Singing Superstar featuring the team of the latest action movie, Valimai, will ensure that each family has a fun-filled Sunday courtesy of Zee Telugu.

Lady director Lakshmi Sowjanya’s rom-com, starring Naga Shaurya and Ritu Verma, follows the story of a free-spirited architect, Akash (Naga Shaurya), who has settled abroad. Bhumi (Ritu Verma), on the other hand, is a strict and punctual woman who owns a start-up company. Destiny plays its part as Akash returns to India searching for a life partner, only for him to end up working for Bhumi’s company. While they find out that they are very different as individuals, their idea of love and marriage is pretty similar. Meanwhile, Bhumi’s mother (Nadiya) wants Bhumi to marry a groom of her choice. She has a very different perspective on marriage than Bhumi, and she keeps sending her multiple marriage proposals. While the epic dialogues, the lead pair’s adorable chemistry and Nadiya’s Tom – Jerry equation with Bhumi will keep you entertained, it will be interesting to see if Bhumi accepts the perfect marriage proposal sent by her mother, or will she end up confessing her feelings for Akash? Varudu Kaavalenu premieres on Zee Telugu on 27th February at 6 pm!

Immediately after the family entertainer, at 9 pm, the entertainment fiesta continues with an exciting first episode of Sa Re Ga Ma Pa – The Singing Superstar. The episode will see the team of Valimai, including producer Boney Kapoor along with music director Yuvan Shankar Raja and actor Karthikeya, entertaining the audience with their interesting anecdotes and wonderful stories. While viewers will be surprised by their interesting revelations, they will be blown away by the contestants’ wonderful performances. All in all, it is going to be a fun weekend for one and all!

So, what are you waiting for? Have a fun-filled Sunday with your family by tuning in to the World Television Premiere of Varudu Kaavalenu as well as the special episode of Sa Re Ga Ma Pa – The Singing Superstar on 27th February at 6 pm and 9 pm respectively, only on Zee Telugu