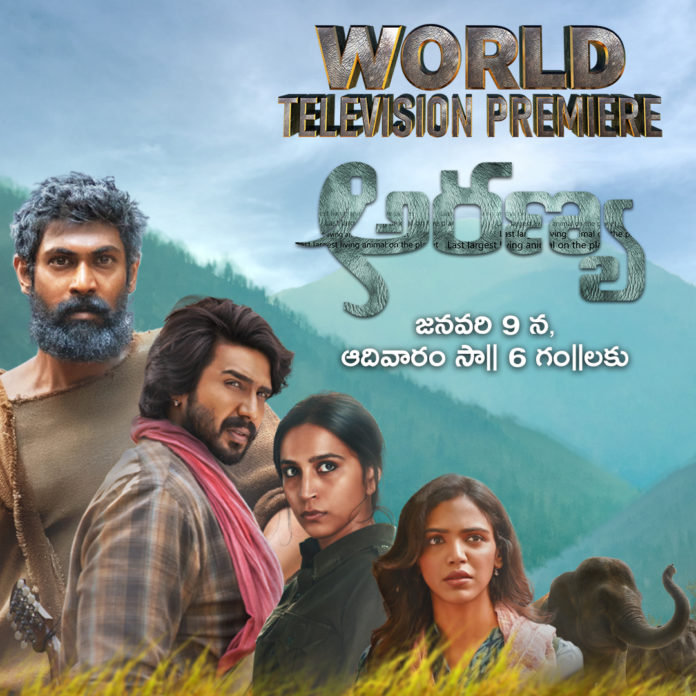 Zee Telugu has always made it a point to provide its viewers with wholesome family entertainment by bringing to its audience recently launched blockbusters. After presenting several hit movies in 2021, the channel is all set to kickstart the New Year with a bang as it brings forth the much-awaited World Television Premiere of ‘Aranya.’ Written and directed by Prabhu Solomon, the movie stars Rana Daggubati as the noble protector of the forests & mighty elephants, along with talented stars like Pulkit Samrat, Shriya Pilgaonkar, Zoya Hussain and Anant Mahadevan in pivotal roles. The World Television Premiere of this epic saga will surely enthral the viewers as it airs on 9th January 2022 at 6 PM.

Set in a forest near Vizag, Aranya showcases the heartwarming story of a man trying to protect the environment and wild animals from the destruction being caused by a huge refinery that is being built by a known corporate house. While this refinery threatens the natural habitat of the Royal Elephants, who have been living in this area for generations, the project continues after getting the necessary blessings of Environment Minister Kanakamedala Raja Gopalam (Anant Mahadevan). The Elephant’s protector – Aranya (Rana Daggubati) tries to rebel, but the company tries to stop them from spoiling the party by building a long wall around the refinery. As a man without resources and connections, Aranya is an underdog. But at the same time, he is also a larger-than-life, cult hero for the forest-dwellers.

Aranya will surely take you on a thrilling ride as Aranya and the Elephants battle to save their natural habitat. While Rana Daggubati’s act will impress you, the real heroes are the elephants. You can’t help but put yourself in their shoes and feel their emotions. Aranya’s bond with the Elephants and the extent to which he goes for them will surely tug at your heartstrings. But can Aranya race against time and prevent the refinery from coming up?

Witness this pure bond beyond worldly confines as the World Television Premiere of ‘Aranya’ airs on 9th January at 6 PM, only on Zee Telugu