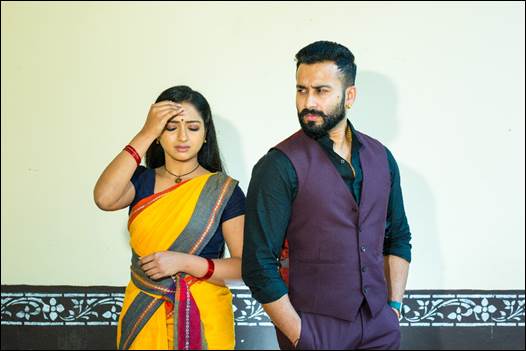 Bringing to life a gothic amalgamation of romance and paranormal activities, Zee Telugu strengthens its primetime offering with a new fantasy drama ‘Trinayani’. An impeccable fiction tale, Trinayani highlights the life of a seer, who can foresee the future and the past. Produced by Annapurna Studios, the epic one-of-its-kind fictional drama will go on-air starting 2nd March and will be telecasted every Monday to Saturday at 8:30 PM only on Zee Telugu and Zee Telugu HD.


Contrary to the trend across the industry, ‘Trinayani’ shifts the focus on a love story told against a truly unique and compelling canvas. A world catering to the curiosity of every viewer’s arbitrary beliefs of the supernatural.

Superstar Mahesh Babu joined hands with Zee Telugu for a unique concept video that garnered numerous accolades from the fans of Prince and ardent viewers of the channel. The charming star shot with the Ashika Gopal Padukone along with the famed anchor Pradeep Machiraju.

Set in the backdrop of fictional village Mukkantipuram, Trinayani promises to be a visual treat for viewers with outstanding VFX effects offering an authentic film-like experience. An aesthetically narrated saga delves into the life of a suave and ambitious business tycoon, Vishal Verma played by Chandu Gowda. The titular role of Trinayani is played by Ashika Gopal Padukone, a seer who takes the decision to live her life for the betterment of people by leveraging her celestial powers.

Commenting about her role as Trinayani aka Ashika Gopal Padukone said, “I like to take up the character with different shades because they give me an opportunity to explore a different facet of my personality. I’m positive that the viewers will enjoy watching me as Trinayani.”

Chandu Gowda, essaying the character of Vishal Varma commented, “This genre is a completely a new territory for me, and I am more than excited to be part of this show. Have always wanted to be a part of the Telugu industry. Need all your blessings.”

The gripping plot, theatrical characterization and intense performances make Trinayani an edge-of-seat thriller show. Once the story unfolds, it creates a sense of excitement as the viewers anticipate what new twist and revelation will change equations among the characters at every stage.

Stay tuned for the mystifying tale of a seer as it premieres on 2nd March 2020, airing every Monday to Saturday at 8:30 PM only on Zee Telugu and Zee Telugu HD