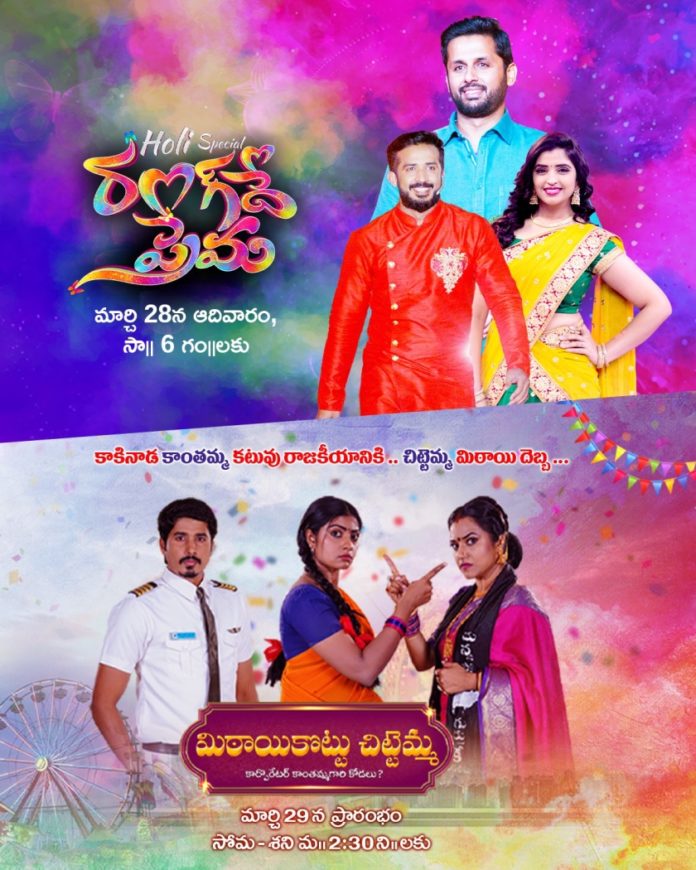 It’s that time of the year when everyone’s thrill-o-meter is at its peak; when the vibrancy of colors takes over their lives and the euphoria of festivities leaves them with their happiest memories! Get set to be drenched in the festivity of colors this Holi as Zee Telugu, is all set to telecast a bouquet of categories to audiences. Adding to the exuberance of the festival, the channel promises to sprinkle joy and sweetness into the lives of their ardent fans with ‘Range De Prema’ a Holi event on 28th March 2021 at 6 PM and launching a new fiction show ‘Mithai Kottu Chittemma’ in afternoon slot at 2:30 PM on 29th March 2021 only on Zee Telugu and Zee Telugu HD.

Celebrating the myriad shades of entertainment this Holi, Zee Telugu will telecast ‘Range De Prema’ on 28th March at 6 PM. Youth Icon, Nitin is going to be the celebrity guest of the show where he would be engaging with the artists and celebrate his birthday. Adding to the galore, Thellavarithe Guruvaram cast and crew are going to be part of the celebrations. The icing on the cake would be Ashika Padukone from Trinayani will share her love story while her fiancé would be part of the jamboree. Besides, audience are going to be captivated by the performances of the leading couples of the channel such as Ashika – Chandu, Anusha – Prathap, Kalki – Pooja, Siddharth – Meghna and Akarsh – Bhoomi among other stellar acts by the Zee Telugu Kutumbam.

Just when you think that’s all for the festival of colors, Zee Telugu brings out more from its kitty. As a harbinger of change, the channel has always striven to inculcate culture ad uphold values through it shows and characters. Taking the same notions forward, Zee Telugu is geared up to impress upon the importance of relationships, family values, traditions, and love with ‘Mithai Kottu Chittemma’ at 2:30 PM from 29thMarch. Adding yet another feature to its visual splendor, the channel’s latest endeavor is an effort to revive and rediscover the fundamental ethics of a family. ‘Mithai Kottu Chittemma’ is directed by renowned director Venu Gopal. The story revolves around Chittemma (Anjana Srinivas) who hails from humble background and owns a sweet shop in Athreyapuram village, East Godavari. Due to twist of fate, Chittemma lands in the family of Kanthamma, a power obsessed aspiring politician. Come and enjoy the rollercoaster ride and find out what Chittemma has in store for us? Amidst ambitious nature of Kanthamma and sweetness of Chittemma, the show promises of lots of drama, romance, comedy, and entertainment.