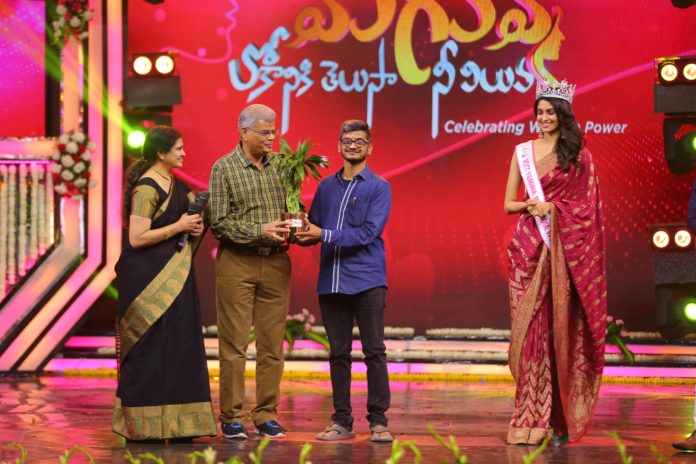 Zee Telugu – a channel known to spread love and laughter, has planned to celebrate International Women’s Day in a rather unique manner this year. The channel plans to telecast a show Maguva, Lokaniki Telusa Nee Viluva – an idea to celebrate the spirit of womanhood and one’s existence every day instead of waiting for someone else or a special day to get appreciated.

The event is about women from different walks of lives coming together and expressing themselves. These women include some of the most commendable names like Miss India 2020 Manasa Varanasi, Kanakavva – a Telangana folk artist, SI Sirisha from Srikakulam, Veena Sravani, Siva Jyothi, Jogini Syamala, Sandhya Raju, Udaya Bhanu, Actress Siva Parvati and Jeevitha Rajasekhar among another notable woman. The channel is all set to telecast the event on 7th March, a day before International Women’s day at 5 PM only on Zee Telugu and Zee Telugu HD channels.

Tastefully shot, with intimate conversations, supplemented with rare archival footage of the special guests, Maguva Lokaniki Telusa Nee Viluva is a tribute to the exceptional women it features. The line-up shifts focus on Zee Telugu artists such as Meghna Lokesh, Sridevi, Sunanda Malasetti, Ritu Chowdhary, Madhumita among others where they showcased the hurdles women face from all walks of life. SRGMP 13th female contestants will be lending their voices for the honorable event and Drama Juniors will captivate the viewers with their splendid acts.

The show will be hosted by the ace anchor Pradeep Machiraju while Miss India 2020 Manasa Varanasi along with her family will grace the event and versatile actresses of the Industry Jeevitha Rajasekhar and Siva Parvathy will be felicitated along with Anchor Uday Bhanu and some other notable women.