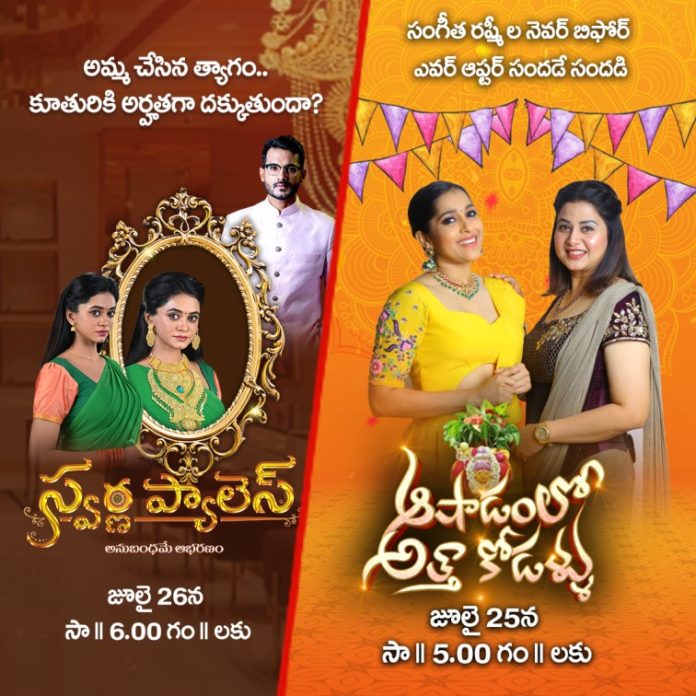 Zee Telugu has consistently given multi-genre entertainment offerings to its ardent viewers. This time, the channel has geared up to celebrate the festive month with a special event titled ‘Aashadam Lo Atha Kodalu’ on 25th July at 5:00 PM and a new serial launch ‘Swarna Palace’ from 26th July at 6:00 PM this weekend.

The extra special event, ‘Aashadam Lo Atha Kodalu,’ is a total treat to the audience. It celebrates the festival with vibrant performances of Zee Telugu’s most loved Athalu and Kodalu. Evergreen actress Sangeetha will be the celebrity guest of the show, where she would be engaging with the artists and dance to the tunes of her hit songs.

Adding to the galore, Rashmi will groove to some peppy songs and level up the viewers’ energy. Besides, the audiences will be captivated by the performances of the leading couples of the channels such as Akul Balaji – Roopa, Chandu – Ashika, Kalki – Pooja, Deepthi – Gokul, and Prajwal PD – Anusha, among other stellar acts by the Zee Telugu Kutumbam. This special event is going to be telecast on 25th July at 5:00 PM.

To add more to the excitement, Zee Telugu is launching a new fictional show, ‘Swarna Palace.’ The main attraction of the new soap is the Shamantakamani Haram, which adds more glory and grandeur to it. Kundana (Chandana Segu) is the daughter of a goldsmith. Kaustubh (Prathap Abhi) is the heir to the Kanakamedala family and the CEO of the Swarna Palace Gold showrooms. The extravagant novel show revolves around two families where Kundana acts as a bridge between the two. The protagonist Kundana is a skilled craftswoman. She is hurt due to the Kanakamedala family as they enjoy the fame that belongs to her father Manikyam and her mother, who is no more. How Kaustabh’s entry into her life changes the fate of both families?

Will she be able to get back the glory her father deserves? To know further, come and enjoy the rollercoaster ride and find out what Kundana has in store for us. Amidst the love and hate relationships, the show promises lots of drama, romance, and entertainment. The show is all set to premiere on July 26th at 6:00 PM.

To enjoy an entertainment-filled festivity, tune into the grand celebrations of ‘Aashadam Lo Atha Kodalu’ on 25th July at 5:00 PM and ‘Swarna Palace’ on 26th July at 6:00 PM only on Zee Telugu and Zee Telugu HD.

To ensure you do not miss out on your favorite Zee Telugu shows, choose the Zee Prime Pack that includes Zee Telugu and Zee Cinemalu alongside 7 other top channels of the Zee Network that cater to the daily entertainment needs of your entire family at Rs. 20 per month only. For further information, contact your DTH or cable operator.

About Zee Telugu:
Zee Telugu is the Telugu General Entertainment Channel of Zee Entertainment Enterprises Ltd (ZEEL). Launched on 18th May 2005, Zee Telugu was the first entrant from Zee bouquet to enter South India. Zee Telugu offers a variety of shows that cater to the entertainment preferences of over 75 million Telugu audiences across India every week. From fiction shows to reality shows and talk shows, the channel has multi-genre offerings and is widely accepted as the ultimate entertainment destination. Zee Telugu creates exceptional content by offering fiction shows with unique storylines, state-of-the-art non-fiction shows & events with extraordinary formats, and acquires satellite rights to some of the largest Tollywood movies that appeal to viewers across age groups.

Zee Telugu is one of the top Telugu GEC channels in Andhra Pradesh and Telangana, with a balanced mix of content and programming options. Zee Telugu is well connected across all cable and digital platforms and also available on ZEE5.