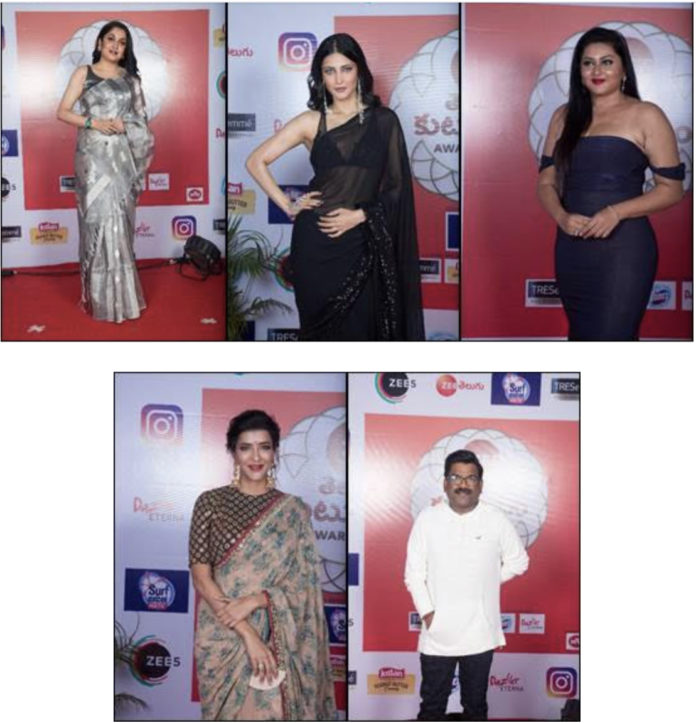 After nine successful years of entertaining the audience, Zee Telugu returned with the 10th edition of Kutumbam Awards 2020. It was a glorious evening in Hyderabad where the red carpet was rolled for the Zee Telugu family to felicitate them and celebrate the exceptional talent in the Zee Telugu Family.

This year, the Kutumbam awards was unique right from the stage and set up was designed to give the viewers cinematic theater and jaw dropping experience as well as would offer the viewer a visual delight when the show is on-air on TV. Zee Telugu has outdone itself this year with the agility of their approach. In keeping with the new normal, adhering to the government regulations, and most importantly in the interest of people’s safety, the award function was held in a restricted studio setup.

It was an evening high on glitz, glamour and entertainment anchored by Pradeep Machiraju, Ravi and Shyamala. There were high-octane and fun-filled performances by the Zee Telugu Kutumbam, providing the audiences with the much-needed thrill for the on-air show. The stage was set on fire with performances of beautiful Namita along with Jani Master Gang and ‘Ishmart Shankar’ fame Nidhi Agarwal. Zee Telugu’s female fiction stars like Yashmi Gowda, Anusha Hegde, Varsha HK, Jaya Kavi, Sunanda Malasetti, Pooja Moorthy and Sireesha danced on the tunes of romantic tunes followed by soulful & high-octane tunes sung by Yasaswi and paid tribute to Late Singer S.P. Balasubramanyam.

A night charged with energy; the event was graced by Queen of South Indian Cinema Ramya Krishnan, Shruti Hassan, Namita, Nidhi Agarwal, Stalwarts of Telugu Cinema S.V. Krishna Reddy & Achi Reddy, Lakshmi Manchu, Omkar, VN Aditya, Vijay Kumar Konda among others. Zee Telugu’s finest actors and brilliant technicians across all their fiction and non-fiction shows were honored for their incomparable contribution towards making the channel one of the most beloved general entertainment channels in the Telugu states

Don’t forget to tune in for some big bang performances and dazzling celebrations of the 10th edition of the Zee Telugu’s Kutumbam Awards on 1st November 2020 at 5 PM only on Zee Telugu and Zee Telugu HD.