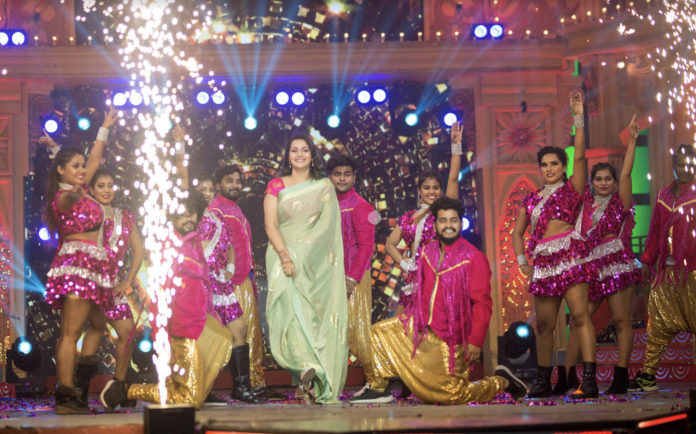 As people gear up for the upcoming festive season amid the global pandemic, Zee Telugu has lined up special programming ‘Zee Entertainment League’ to usher in the festivities and spread cheer. The special series will keep viewers positively engaged and entertained by fun, comical skits, musical melodies and sensational performances by the stars from the channel. The event will be telecasted on Sunday, 11th October from 5:00 PM only on Zee Telugu and Zee Telugu HD.

Zee Telugu’s most cherished anchors, Ravi and Shyamala will add to the entertainment quotient by hosting this exceptional event. Shyamala and Ravi take this opportunity to welcome the artists, bringing them together to celebrate the joy with a blend of fun activities, competition between Fiction and Non-fiction stars along with a unique set of performances.

There is a surprise element in the show where Renu Desai makes an unexpected appearance as a special judge. Not is she seen playing pranks with anchor Ravi but also gives away the Zee Entertainment League Award. Additionally, there is a special walk-in by Nagabhairavi cast which includes, Pawon, Yashmi Gowda, Kalki Raja, Ashwini, Shiva Shankar Master among others.

The event also consists of many fun games. Contestants from SRGMP 13th season performed on digital blockbuster Life of Ram lead by Yashaswi. Besides the act, Ravi and Jani Master had the guests in splits. The jamboree includes an exceptional performances by Shyamala, Jani master along with the fiction stars on the tunes of Butta Bomma from Ala Vaikuntapuramlo.

Tune-in to watch Zee Entertainment League on 11th October at 5:00 PM only on Zee Telugu and Zee Telugu HD.