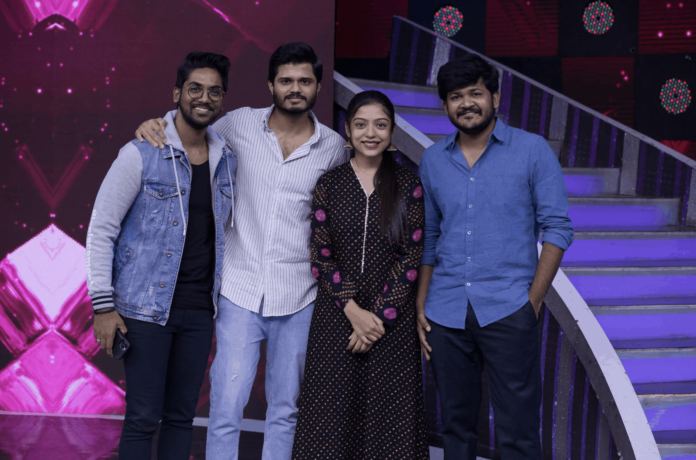 With a promise to keep viewers enthralled like never before, Zee Telugu is all set to present a wholesome entertainment experience this Sunday from 8- 10 PM only on Zee Telugu and Zee Telugu HD channels.

The upcoming gala episode of Zee Telugu’s Sa Re Ga Ma Pa 13th Season will witness Anand Devarakonda, Varsha Bollamma, and Vinod Anatoju as special walk-in guests.  The contestants, along with the judges, receive the opportunity to be in the company of the cast and crew of Middle-Class Melodies. Besides, actress Varsha will entertain viewers by singing a Tamil song, while Anand Devarakonda will take over the stage with an English song that will serve as much-needed entertainment. The cherry on the cake would be the Director Vinod Anatoju, who would capture the viewers’ hearts with the song ‘Idi Gunturey’ from Middle-Class Melodies. The special episode will be telecasted on 3rd January 2021 at 8:00 PM only on Zee Telugu and Zee Telugu HD.

Talent resides in every individual; it is the multiplier of energy, determination, and hard work. The stage is set, and participants are geared up to righteously flaunt their hidden flair on Zee Telugu’s Big Celebrity Challenge as it returns with Season 5 with adrenalin pumping performances. This week, Supreme Star Sai Dharam Teja will promote his film Solo Brathuke So Better on the show. The ardent fans will receive the opportunity to witness him on the show on 3rd January 2021 at 9:00 PM only on Zee Telugu and Zee Telugu HD.

Adrushta Yogam 2021, yet another treat for Zee Telugu’s audience from 10:30 PM on 31st December with Vakkantham Chandramouli, Rama Ravi Syamala. Also, bringing to you exceptional mornings with the new year, Zee Telugu showcase Tejaswini Manogna in Aarogyam Mahayogam at 8:30 AM.

To catch all the fun & extraordinary performances, stay tuned to Sa Re Ga Ma Pa Season 13th this Sunday at 8:00 PM and Big Celebrity Challenge Season 5 at 9:00 PM only on Zee Telugu and Zee Telugu HD.