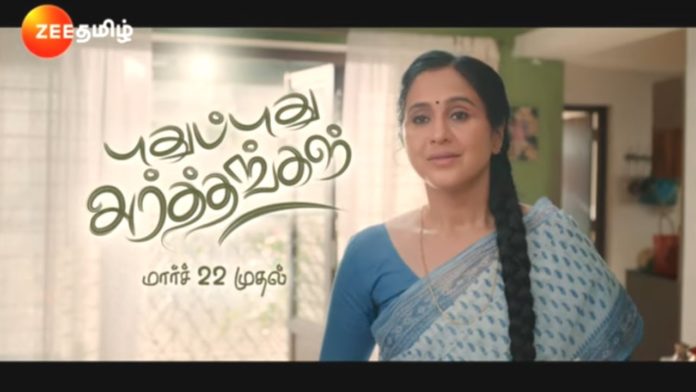 Chennai, 18 March 2021: Leading Tamil General Entertainment Channel (GEC) – Zee Tamil is known for showcasing thought-provoking and compelling narratives that have become notable television classics in recent years. Furthering its brand tagline of ‘Manadhaal Inaivom, Maatrathai Varaverppom,’ the channel is set to launch another major prime-time show – Pudhu Pudhu Arthangal on Monday, 22nd March at 8:30 PM. The show will be aired between Monday – Saturday only on Zee Tamil and Zee Tamil HD. Audiences can also watch the show in leisure on Zee5.

Pudhu Pudhu Arthangal is a light-hearted modern-day family drama depicting the heart-warming relationship between a mother-in-law and daughter-in-law. The show follows the life of Lakshmi, whose life revolves around the well-being of her son and father-in-law, for which she often compromises on her own needs. The story evolves as Lakshmi’s progressive daughter-in-law empowers her on a journey towards finding love and happiness and overcome the obstacles thrown by society and the rest of her family.

The noteworthy cast includes Devyani, Abhishek Shankar, VJ Parvathi, Niyaz, and Dindigul I. Leoni, who are set to define new limits to entertainment never-seen-before. The show also marks the reunion of Devyani and Abhishek – the hit pair from the iconic daily-soap ‘Kolangal’ who essay the roles of Lakshmi and Hari Krishnan, respectively. Their new avatar is prepared to enthrall audiences once again after having ruled Tamil television screens for 6 years.

Speaking on the new launch, Mr. Siju Prabhakaran, EVP and South Cluster Head said, “With our growing commitment towards satiating the entertainment needs of our diverse set of viewers, we at Zee Tamil are focused on presenting unique content with compelling narratives inspired by the society around us. Pudhu Pudhu Arthangal is a carefully crafted tale aimed at entertaining viewers while making them understand and relate with the challenges society throws at women and how they overcome them with grace”.

Zee Tamil is the Tamil General Entertainment Channel of Zee Entertainment Enterprises Ltd (ZEEL). Launched in October 2008, Zee Tamil offers a variety of shows that cater to Tamil audiences’ entertainment preferences across the world. From fiction shows to reality shows and talk shows, the channel with its multi-genre offerings is widely accepted as the one-stop family entertainment destination. Zee Tamil has created multiple blockbuster shows like Mr & Mrs. Khiladis, Junior Super Stars, Dance Jodi Dance, Sa Re Ga Ma Pa, whose unique and never-seen-before formats have appealed to viewers across age groups. The holistic mix of content and programming options make Zee Tamil one of the fastest-growing Tamil GECs in Tamil Nadu.