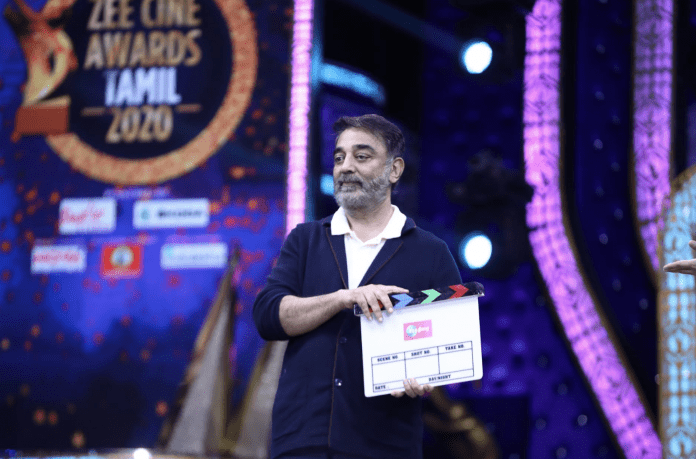 The first ever Zee Cine Awards Tamil 2020 held on the 4th of January was a celebration of Tamil cinema with Zee Tamil honouring the talent that has revolutionized the industry. Amidst the grandeur, Zee Entertainment Enterprises Limited (ZEEL) officially announced its entry into the Tamil Film Entertainment space with a new movie channel – Zee Thirai. The new channel is the sixth channel in the Southern region by the network and the second movie channel in the south after Zee Cinemalu.


The announcement was made during the momentous occasion by Mr Punit Mishra, CEO- Zee Entertainment Enterprises Ltd. (India Broadcast Business) along with the emperor of Tamil Cinema- Dr Kamal Hassan. While Mr Mishra thanked the audience for their immense love and support towards Zee Tamil and dedicated the new channel to the people of Tamil Nadu, Kamal Hassan officiated the launch of Zee Thirai with a clapboard to an ecstatic audience.

Zee Thirai, a movie channel dedicated to Tamil cinema enthusiasts, is set to resonate with the pulse of Tamilians and their love for cinema that has deep cultural and social context in the lives of Tamilians around the world. The brand tagline – “Rathathil Kalandhadhu Cinema” which literally translates to “Cinema is infused in our blood” represents the passion and impact that movies have on the Tamil Market and the power that it has to inspire the dreams and visions of the common man.

Zee Thirai is the Tamil Film Entertainment Channel of Zee Entertainment Enterprises Ltd (ZEEL). Launching in Q4 FY 19-20, Zee Thirai is set to emerge as the one-stop destination for fans of Tamil Cinema across the world. With a strong library of over 400+ films across genres such as horror, comedy, action-thriller, drama and so on, the channel aims to change the conversation from the ‘what’ to the ‘why’ of cinema. The on-air launch of Zee Thirai is slated for Sunday, 19th January.