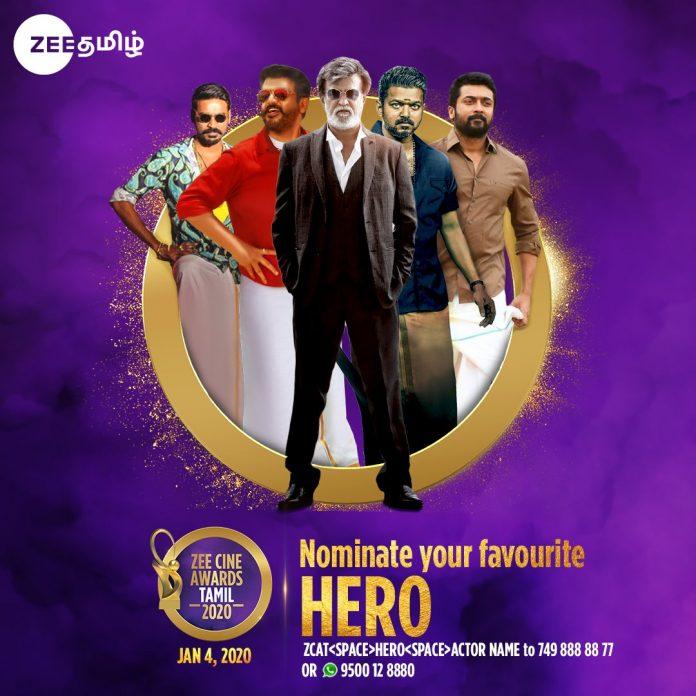 Zee Tamil is gearing up for its first ever Zee Cine Awards Tamil on Saturday January 4, 2020. After launching Zee Tamil Kutumba Viruthugal, Zee Tamil is gearing up to honour the talent that has revolutionised the Tamil Cinema industry with the Zee Cine Awards Tamil 2020. The channel announced the first-ever edition of the prestigious Zee Cine Awards Tamil at a press event in Chennai. The trophy was unveiled among the presence of the Guest of Honour, Actor Karthi and esteemed Jury members – veterans and passionate members of the industry- Suhasini Mani Ratnam, Gautham Vasudev Menon, Karupalaniappan, Bharath Bala and Baradhwaj Rangan.

In the last few years, Zee Tamil has become a major player in providing fresh and quality content in Tamil. And what better than an award property to boost their portfolio of rich Kollywood film acquisitions. Zee Cine Awards Online Voting will be open after the nominations list is announced.

According to reports, the following actors will be nominated for for the best actors award or the favorite hero award.

The battle for the best hero award is the most nail biting one in every award ceremony, especially in Tamil cinema industry. The industry is ruled by mass heroes like Ajith, Vijay and Rajinikanth’s immortal aura. However, stunning on screen performances by Karthik, Dhanush and Surya help in making the competition even tougher. The story with Zee Cine Awards Tamil 2020 is pretty much the same.

‘Ilayathalapathy’ Vijay leads with a massive 40% vote share while Ajith is at a distant second position. Though Mammootty received the second most number of votes, his nomination is yet to be confirmed.

Considering the fan base which Ajith and Vijay have, it will be interesting to see if the battle for votes will intensify in the coming days.

Who Will Win the Zee Cine Awards 2020 Award for Best Hero?

Who do you think will win the Zee Cine Awards 2020 for the Best and Favorite Hero categories? Let us know in the comments below.