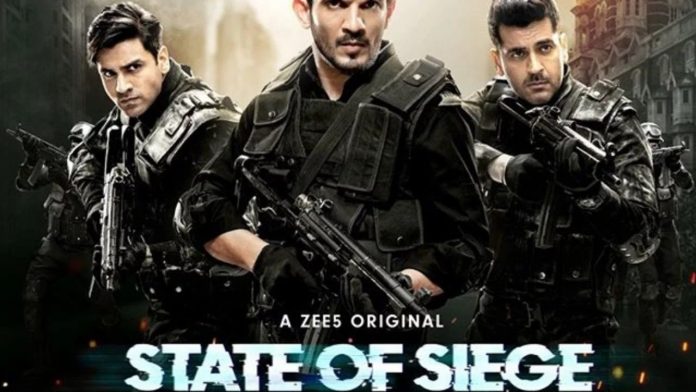 The 26/11 attack shook not only Mumbai but the rest of India as well. People across the nation were shivering in fright and disgust at the happenings. The terror attack destroyed the financial capital of India. There have been films since then that have portrayed the visual happenings of that day. These films have been realistic and captivating. Zee 5, will soon be streaming its new series, State of Siege. It is based on Sandeep Unnithan, author and journalist’s book Black Tornado. This series has eight episodes which will unravel the stories that have not been heard about that dreadful night. The series is produced by Contiloe Pictures and co-created and directed by Matthew Leutwyler. The series was set for a January release but due to unforeseen circumstances will be released on 20th March 2020.

The trailer of State of Siege is gripping and captivates the eye of the viewer. The series is set to be based on the 26/11 terror attacks on the Taj Mahal Hotel in Mumbai. Many innocent people including people of uniform lost their lives in this brutal murder that was driven by the members of a Pakistani terrorist organisation. They ripped apart families and the financial capital of India.

This Zee5 endeavour revisits the November 208 terror attacks in Mumbai. This was formulated and brought to action by the members of Pakistan’s terrorist organisation, Lashkar-e-Taiba. The terrorists are said to have used the waterways to gain entry and create chaos within the nation. During this attack, 170 innocent citizens of India lost their lives. The attack was between 26th November and 29th November. One of the prime locations was the siege of the Taj Mahal Hotel.

People can kill for their country, but he is willing to die for his. Watch me play the role of Captain Rohit Bagga in #StateOfSiege2611. Premieres 20th March. #3DaysToGo @ZEE5Premium

How to watch State of Siege

State of Siege will be released on 20th March 2020 on Zee 5. It will available on the Zee 5 app for streaming. To watch the show follow the following steps.

Rajnikanth-Bear Grylls ‘Into The With With Bear Grylls’ Episode Leaked Online!