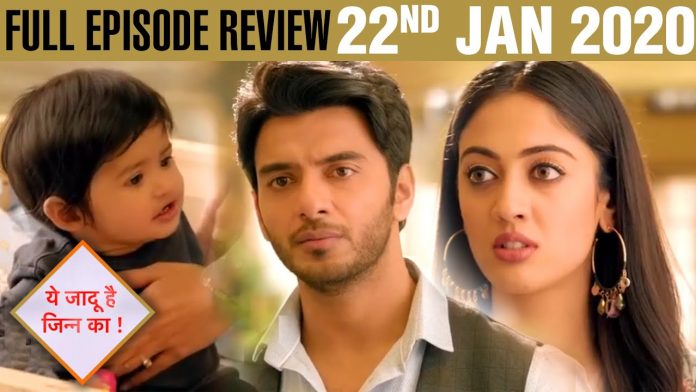 The episode starts with Parveen asking everyone to leave as she is fine. Tabeezi sees the flash of something but is called away by dadi. Dadi tells everyone that she thought Kabir’s chapter was closed. Aman says that we have to be careful as he can take the form of anyone among us. Tabeezi tells that sifriti jinn is good at hiding powers but she will find a way to keep a lookout.


Parveen tries to retrieve the ring but is interrupted by Mr. Chotu, who asks her to take rest as she is not well. Aman is in the room and Roshni goes there and says that happiness is a weird thing when we wait for it so much it comes and is short-lived. But stress however we want it to go away it always comes back. She assures Aman that this time around she will kick the stress out of their lives.

She is deciding upon the stress buster and fixates upon baking. Aman tells her not to do so as it will lead to an increase in his stress. Aman apologizes to Roshni for all that she has to go through. Roshni reminds him how his face had turned ashen when he thought she was dying. Roshni reenacts the scene and Aman tells her to stop as it was not funny then and it is not so now. He goes on to tell her that it was like ….. and they share a moment finishing each other’s sentences. They get closer and feel an electric current stinging, they separate, try again and the same thing happens. Parveen is taking a stroll with bua and she tries to get rid of her so she could retrieve the ring as all her magical powers are stored in the ring.

Aman and Roshni visit Tabeezi and she tells them that the poison might no longer be present but the effects are still there. As the poison was injected to separate them, its effect is still working that way. Roshni questions Tabeezi how long will this go on? Tabeezi assures her that she will find a solution.

Tabeezi recalls the flash she had seen and decided to find if it was anything that can help her in tracking Kabir. She opens her book and tries to find out. Parveen comes to her room and finds the ring missing, she thinks that if that ring gets in anyone’s hand it can be easily traced back to her. On the other that Tabeezi gets the ring through the book, concludes that it is a Safreeti ring and thinks it belongs to Kabir.

During their car ride back home, Roshni is sad that they cannot touch each other. Aman starts teasing her and they share a light banter. Roshni suddenly notices a child on the road and asks a]Aman to lookout. They rush out of the car to the child. Roshni picks him up and tells that it looks like someone has left the child on the road whereas Aman tells it looks like someone dropped the child. Roshni suggests that even though she is good with kids they should take him to the police station. Aman silences her as he senses some presence and summons bazigaar. He finds a woman bruised and unconscious, he recognizes her and calls her Aliya.

Aman asks her to explain and she tells him that the baby is his. Listening to this everyone is shocked. Meanwhile, a small snake emerges from behind Aliya’s neck and starts crawling, she nudges it back making sure no one noticed.

Dadi is crying and Bua is with her, Aman comes to them and does not know what to say. Dadi asks him if he has talked to Roshni. He says no and she asks him to go and talk to her. Aman finds Roshni in their room crying. She questions him why he never told her about Alia before.

Precap: Dadi tells that its time to find out who the real father of the baby is? Aman supports Aliya and tells everyone that he is the father. Aliya says I hope this satisfies everyone and begins to leave with the child. Aman stops her and tells her the baby will stay in this house he further adds that even she need not go anywhere.