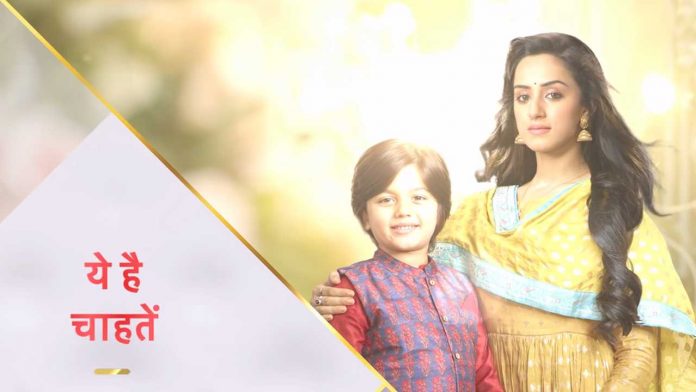 An interesting week of drama is set to take place in Yeh Hai Chahatein. In today’s episode Rudraksh stops Ahana from humiliating Preesha’s mother,He sends her back along with the mehndi designer after convincing Ahana. On the other hand, Rudraksh confronts his brother Rajeev showing him the jewelry receipt that he had obtained from Yuvraaj and questioning him about the necklace,Rajeev gets agitated and tells Rudraksh that it’s a piece of jewelry anyone can have it made and anyone can wear it. Rudraksh refuses to listen and keeps on blaming Preesha, questioning what are the odds of Preesha wearing the necklace for her mehndi function on the same day that Ahana had found the necklace to be missing.

Rudraksh questions Rajeev as to why he is stealing from his own house and why is he giving them to Preesha, He asks his brother to reveal if he is under any kind of pressure and how is Preesha blackmailing him? Rajeev refuses which leads to Rudraksh questioning him about the text message he had received demanding 5 Cr and the necklace had gone missing after that, He tells Rajeev that he had seen the message, listening to this Rajeev gets tensed, he then questions the coincidence of finding both the money and necklace with Preesha. In the meanwhile Rudraksh rants about Preesha saying “how shameless she is, she has stolen the necklace and without an ounce of fear is claiming to have been given them by his would-be husband, Yuvraaj Pillai.”

Rajeev becomes alert hearing this and thinks that Yuvraaj could be the one blackmailing him as he is still was chafed about not receiving anything from the Khuranas out of the court case, but he keeps pondering as to how Yuvraaj knows about Mahima and his child. Rajeev decides to find out what Yuvraaj is up to and how he has all the information that he has. On the other hand,Preesha’s family congratulate Yuvraaj on becoming the judge, Yuvraaj takes blessings from Preesha’s parents and thanks them. Preesha is thrilled for Yuvraaj as he is going to become the youngest judge, she tells him that he deserves it after putting in all the hard work that he has done.