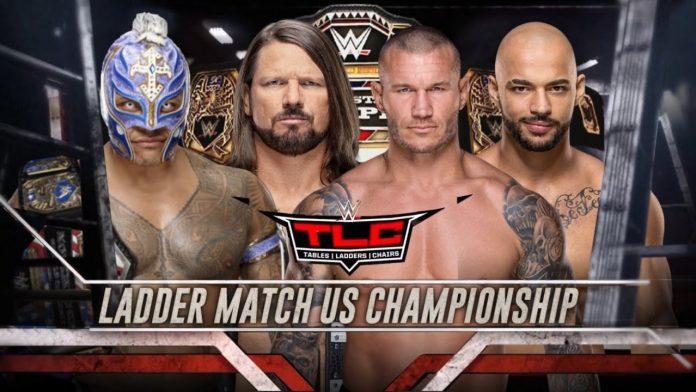 Streaming Live this Sunday will be Tables, Ladders and Chairs Pay per view. This is the last pay per view for the year 2019. There are three championships which will be defended on this pay per view. Notable absentee will be current WWE Champion Brock Lesnar. Lesnar only performs on selective pay per views, plus he is also absent on RAW episodes. The intensity will be high as there are many rivalries which have been formed. Expect some brutal matches to happen at this Pay Per View.

The Kabuki Warriors (champions) vs Charlotte and Becky Lynch- Womens Tag Team Title Matches.
The Kabuki Warriors have already shown why they are the best tag team in the Women’s division. They have dissimilated both the challengers individually and have proved a point. On the other hand, its time for redemption for Becky and Charlotte. They need to keep their personal rivalry aside and perform as a team to defeat The Kabuki Warriors. We can expect Becky to once again be Becky Two Belts.
Prediction- Charlotte and Becky Lynch to become New Women’s Tag Team Champions.

Bray Wyatt vs The Miz
For this bout, the Unviersal Championship won’t be on line. Bray Wyatt has got the knack of getting on the nerves of his challengers by weakening them emotionally. Also, his new gimmick, The Fiend has been successful to terrorize his opponents. Miz, being a seasoned veteran shall give his fans a pleasing match but expect Wyatt to conquer Miz. We can also expect Daniel Bryan interfering in this match. You never know, we can see a Triple Threat Match for the title at the next Pay Per View.

The Viking Raiders are about to issue an open challenge to anyone in the locker room for the title. They have shown their dominance on all Raw Episodes. Expected Challengers can be The Street Profits or The OC.

Prediction- The Viking Raiders shall retain the championship.

It has been a give and take relationship between these two tag teams. Both the teams have shown their A-game whenever needed. Expect this match to be a classic contest.

Prediction- The Revival shall win The Smackdown Tag Team Titles.

In the last episode, Rusev showed why he is called a brute as he destroyed Bobby Lashley. This feud has been a hit since its inception. Rusev needs an upliftment, so expect him to win.

Prediction- Rusev defeats Bobby Lashley by throwing him through a table.

King Corbin has been pretty successful in defeating Reigns on Smackdown episodes. Last episode, he destroyed Reigns. This bout could be the final chapter of their feud. Roman Reigns is always believed to bring his best game at Pay Per Views, so we don’t expect Roman to lose this one. Expect Dolph Ziggler and Robert Roode to interfere in this match.

They both have swore to tear each apart down at this Pay Per View. WWE is keen on giving Black a good push ahead, so we don’t expect him to lose this bout.