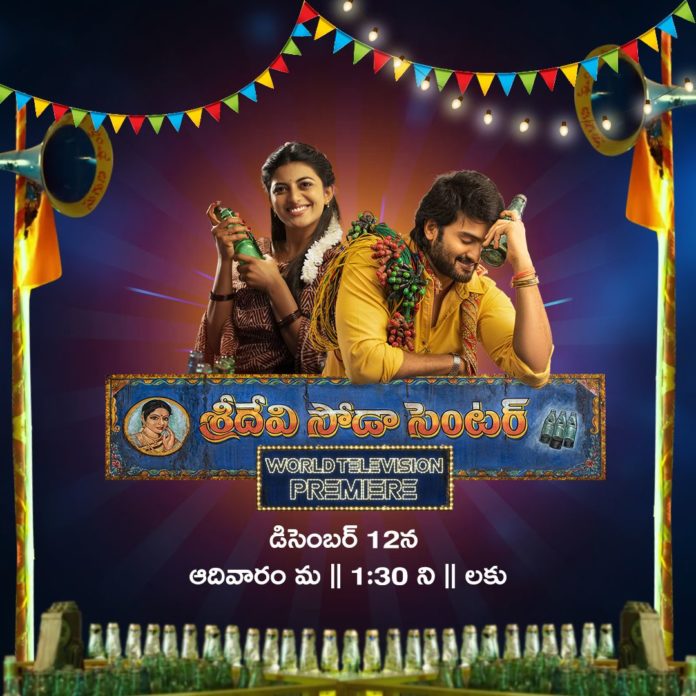 Zee Telugu, one of the leading GECs in the Telugu states, has been bringing best of entertainment experiences to its audiences year on year. This December, the channel is upping its ante by announcing the world television premiere of Karuna Kumar’s romantic action drama ‘Sridevi Soda Center’. The movie stars Sudheer Babu and Anandhi in the lead roles and will premiere on Sunday, December 12that 1:30 PM on Zee Telugu.

A poisoned heart is one with no honor. When it pumps its poison into its veins, death and destruction seem inevitable. Breathing life into this belief is Karuna Kumar’s Sridevi Soda Center. Set in one of the towns lining the coastal belt of Andhra Pradesh, the movie takes us through the story of Soori Babu (Sudheer Babu), a lighting technician, who falls in love with Sodalu Sridevi (Anandhi), an upper-caste girl. Their pursuit of love faces seemingly insurmountable obstacles in the form of Kasi (Pavel Navageethan), who also has an eye on Sridevi. Meanwhile, her father Sanjeev Rao (Naresh), though immensely fond of his daughter, is against inter-caste marriage. The prevailing caste system does not permit Soori Babu and Sridevi to be together and they get mired in problems. How Soori Babu gets the better of trouble-mongers and moves ahead to take on the mantle of leader is bound to leave the viewers at the edge of their seats while cheering for their hero.

Love stories plagued by caste conflicts are not a fresh concept to Tollywood. What’s fresh, however, is the narrator– Karuna Kumar – and the much-celebrated conclusion. After all, Sridevi Soda Center comes with all the elements to please the cine-goers.

Mark your calendars right away to witness the world television premiere of ‘Sridevi Soda Center’ on 12th December at 1:30 PM only on Zee Telugu