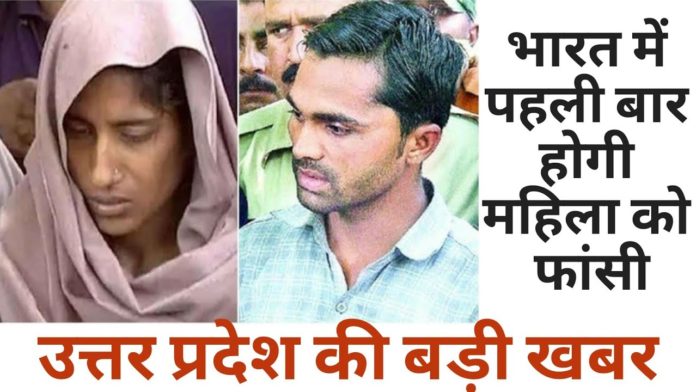 Shabnam and her lover Salim from Uttar Pradesh’s Amroha district will be hanged together. On the other hand, after India attained independence, for the first time in the country a female criminal will be given the death sentence. For this, preparations have also started in Mathura jail. Shabnam, who lives in Amroha, will be hanged in the only hanging house in Uttar Pradesh in Mathura. Preparations have also started in Mathura jail for this. Pawan hangman who hanged Nirbhaya’s culprits so far has also inspected the hanging house twice.

After the revision petition from the Supreme Court was rejected, now the President has also upheld the death sentence of Shabnam, who was closed on the charge of murder, now it is decided to hang him. Preparations have also begun for Shabnam’s hanging in the women’s hanging house in Mathura jail. Shabnam will be hanged as soon as the death warrant is issued.

Rope from buxar
In Mathura District Prison, the executioner Pawan noticed some deficiency in the throne lever, which the administration is fixing. To hang Shabnam, a rope is being sourced from Buxar in Bihar so that no obstruction is created.

Who is Shabnam Ali?
Shabnam, the only daughter of Shaukat Ali, a teacher in village Bawankhedi in Hasanpur area of ​​Amroha district, had a love affair with Salim. Shabnam of the Sufi family did MA in English and Geography. Her family owned a lot of land. At the same time, Salim was a fifth standard failure and was a laborer by profession. Therefore, family members were protesting about their relationship.

Shabnam, along with her boyfriend on the night of April 14, 2008, played such a bloody game that the whole country was shaken after hearing it. Shabnam first administered sedation to seven family members, including her parents and 10-month-old nephew. They were cut and killed with an axe.

After committing the murder, Shabnam started crying and screaming. When people nearby arrived, they were stunned to see the situation. Seven corpses were covered in blood. Shabnam, a 25-year-old girl, was left alive at home. This sensational murder in the middle of the night caused a stir in the police administration. Shabnam told the police that the robbers entered her house and killed the entire family. She was at bathroom, so survived.

Such gripes on Shabnam and Salim
The police investigated the robbery angle, but no evidence was found. After this, when the police paid attention to the scene, many questions arose. Those who died did not try to save themselves? No evidence of looting found? Meanwhile, the postmortem report shocked everyone. According to the report, the dead were rendered unconscious by being fed some medicine before killing them.

After the postmortem report, the suspicion of the police turned on Shabnam. Shabnam’s call details were taken out, which showed that on the night of the murder, Shabnam spoke several times on the same number. Police later found Shabnam pregnant. Shabnam was not married, so the police found this information very important in this murder case. After this, the police started a strict interrogation of Shabnam. Shabnam finally breaks down and confesses her crime.

To commit love is not a crime, but for love, the crime that was commited by Shabnam-Salim is shocking. Love is so soft, how can such a strict step be taken for him or in his name, the same question bothers after such incidents.

In the midst of the execution by hanging, this question will also always resonate that how the fragile Shabnam, like a drop of dew, got stubborn and ended up destroying her own family?