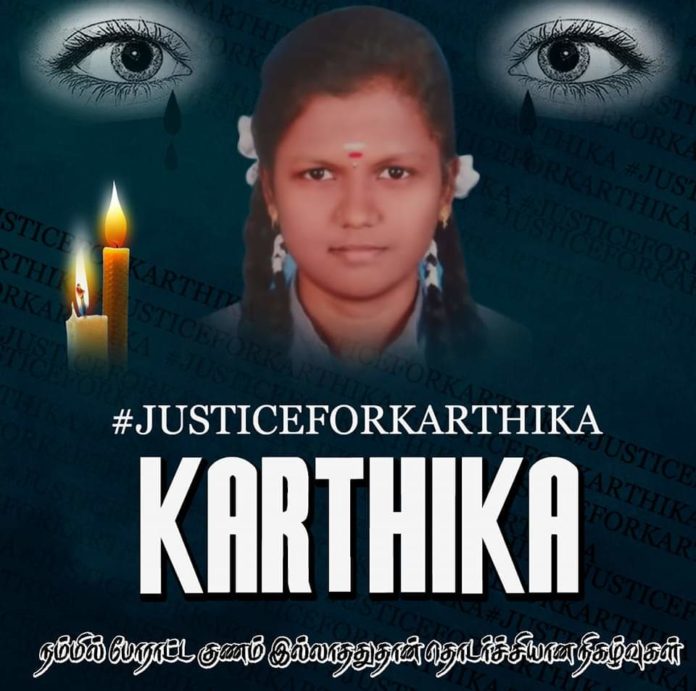 Karthika, a 15-year-old girl from Sivanandhapuram in Coimbatore, who was reported missing, was found dead near Saravanampatti on Thursday.

The girl, who was studying in class 10, was missing since 11th December 2021. According to police, sanitation workers of Coimbatore Corporation found her body stuffed in a sack, with her limbs tied, in the bushes near a sewer in Velmurugan Nagar. The workers cleaned the place as the locals complained of a foul smell, police said. The body was in a decomposed state.

Police sent the body for autopsy to ascertain if she was sexually assaulted. Police said the girl lived with her mother, grandmother, and elder sister in Sivanandhapuram. Her mother is a construction worker, and her sister works in a textile shop.

On Saturday, the girl was alone at the house when she went missing. The mother complained about the All-Women (East) police on Monday. The mother said a mobile shop owner saw the girl talking on the phone in front of the house at 10.30 am on Saturday.

Commissioner of Police Pradip Kumar has constituted three special teams to investigate the case. Several organisations on Thursday evening staged a protest in front of the Coimbatore Medical College Hospital, where the girl’s body is kept, demanding the arrest of perpetrators. Sources said one suspect was picked up for questioning.

Now #JusticeforKarthika trending on social media as people are enraged by the act and are seeking justice through social media.