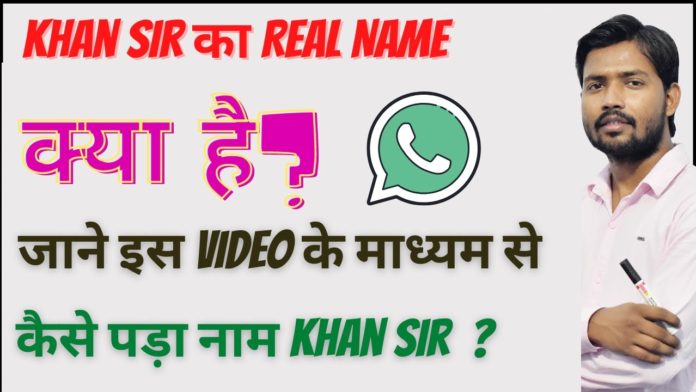 The era of social media is such that in a blink of an eye, a man reaches the floor in terms of popularity and hauls from the floor. Raising the dead issues is the favorite work of active people on social media. In doing so, people get something to troll on social media. Something similar has happened with Khan sir, who teaches GS in Patna.

Khan sir teaches GS in a very funny way. He has hiss own YouTube channel. His YouTube channel named Khan GS Research Center has over 92 lakh subscribers. He continues to teach special topics in his Bihari style and also makes special comments. This is usually liked by many and hence has a huge fan base.

Khan Sir had put a video on France-Pakistan relations on 24 April 2021. In this video, he mentioned at one place that mass protests are taking place in Pakistan to send back the French ambassador. Children are also participating in these protests.

Commented on people of particular religion
During this time, the comment he made has caused a lot of ruckus. He said, ‘This poor child is saved in e rally. No one knows what the ambassador is, what he knows. But the French ambassador will be taken out. They do not know anything. After this, Khan got swayed by the sentiment and commented against a religious sect and said, but what to do, if 18-19 children are born, then what will be the use? Some will wash the dishes, some will bite the goat, some will make a puncture.’

This clip of Khan sir’s video went viral on Twitter and created a ruckus. #Reportonkhansir started trending due to comments made against a particular religion. Some people started calling him Islamophobic. People got divided into two groups, one in his favor and the other started commenting against him.

Who is Amit Singh or Faizal Khan?
The matter reached here that people started to search for the entire life history of Khan sir. Some have even found that video clip in which they are seen saying that people call him as Amit Singh. In such a situation, #AmitSingh also started trending. After this, some other theories also came up with the name of Khan sir, in which his Gorakhpur and Allahabad connection was also investigated and his name is being said as Faizal Khan.

The matter is taking a new turn every moment. Khan Sir has not yet issued any clarification regarding this, in such a situation, everyone is waiting for his reply on this matter.