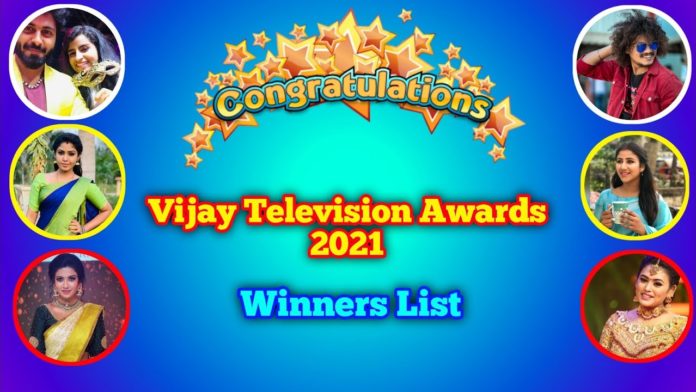 The much-awaited awards show, Vijay Television Awards 2021 will be telecasted on Star Vijay on 18th of April 2021 at 3 PM IST. However, the suspense around the winners of the various awards grips the audience. The glitzy awards show will feature top celebrities from the Vijay TV family.

Star Vijay’s shows were a treat to watch throughout the whole year. Several reality shows like Cooku With Comali 2 and popular serial dramas like Bharathi Kanamma ruled the TRP list. However, the night to felicitate the best performers and talented stars is here. Vijay Television Awards

There will be several categories of awards for the night. However, there will be special performances by the coveted stars which will light up the stage. A number of stars and film fraternity will grace Vijay Television Awards 2021.

The entire Bigg Boss Tamil Season 4 and Cook With Comali 2 cast will be a part of the awards. Several promo videos were released which featured the emotional journey of the stars and their gratitude to Star Vijay.

The actor who passed away last year, Chitra was awarded the ‘Makkalin Naayagi’ Award. The year 2021 was successful for Star Vijay. It featured some fantastic shows like ‘Cook With Comali’ Season 2, Bharathi Kannamma, and Raja Rani 2 have captivated the audience by leaps and bounds. The stellar anchoring and amazing set of contestants put Super Singer and Neeya Naana also on the must-watch list. However, the suspense around the award winners is gripping the audience.

Bigg Boss team featuring Suresh and Archana will dance and sing to a few sings with Cooku With Comali 2 fame Deepa. The glitzy awards night is filled with a lot of fun, frolic, emotions and crackling performances.