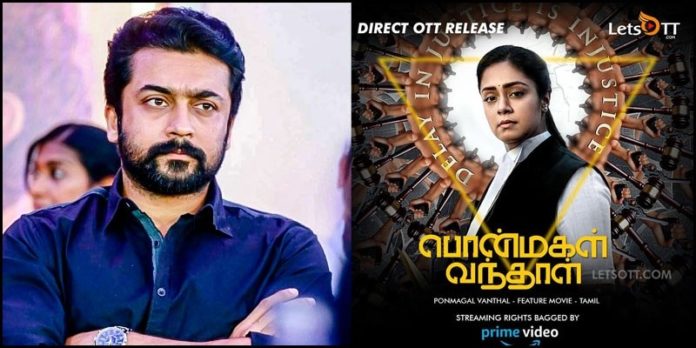 Covid-19 lockdown in India has caused a lot of delays in releases of upcoming movies since March 2020. As a result, a lot of much hyped Tamil, Hindi and Telugu films are considering a direct OTT digital streaming release to avoid any further losses. Also, the increased viewership and subscription rates on Hostar, Prime Video, Netflix and Zee5 is making producers consider digital streaming releases as a strong possibility for upcoming movie releases.

Upcoming Releases on Prime Video in May 2020


A new Tamil thriller starring Jyotika ‘PonMagal Vandhal’ was announced in January 2020. Little did we know that one of the most awaited Tamil movies in 2020 will be fated for a digital streaming release due to the Covid-19 lockdown.  The movie is written and directed by JJ Fredrick, It is going to be his debut film as a director. The film is produced by Suriya and Rajsekhar Pandian under a 2D Entertainment banner.

Jyothika’s movies are received well by the audience. It will be different compared to contemporary films which will make it a success. The movie revolves around a courtoom drama and we can’t wait to watch more of it. Ponmagal Vandhal was scheduled for a theatrical release on the 27th of March 2020. Ponmagal Vandhal is all set to release on Prime Video towards the end May 2020.

GV Prakash – Vetrimaaran combo have always worked well and he has shown that in their latest movie Asuran. Now the music director who is a busy actor returns once again to compose his 75th movie for Vetrimaaran. Actor Suriya who had last acted in Kaappaan, will be seen next in Sudha Kongara’s Soorarai Pottru, which is set to release this summer. On the other hand, the actor had recently signed his 40th movie which will be directed by Vetrimaaran, who is fresh from the success of Asuran. However, coronavirus has a different plan for Soorarai Pottru Release.

This movie, Suriya 40 is produced by Kalaipuli S Thanu in his V Creations banner, and was officially announced recently. Now it has been made official that this movie will have music by the talented composer GV Prakash, for whom this is the 75th movie.

GV Prakash has earlier worked with Suriya in the upcoming Soorarai Pottru which is his 70th movie, and with Vetrimaaran he has worked in Pollathavan, Aadukalam, Visaranai and the recent hit Asuran.

The official release date for Soorarai Pottru is yet to be confirmed on Prime Video.

Arjun Das who shot to fame from his eccentric junkie villain role in Kaithi is back with his latest film ‘Andhaghaaram’. ‘Andhaghaaram’ is produced by Bigil director Atlee under his banner A for Apple productions. However, the film is directed by V Vignarajan and has already received amazing reviews from its pre-release screenings.

The official release date of Andhaghaaram on Prime Video is likely to happen towards the end of May 2020. However, reports suggest direct OTT release is most likely to be confirmed for Andhaghaaram.

Server Sundaram has been delayed quite a lot and it looks like Covid-19 is pushing yet another hyped Tamil movie towards a direct digital streaming release. Server Sundaram is an action comedy genre starring the celebrated comedian of the yesteryear, Santhanam. Santhanam is paired with Vaibhavi Shandilya for the film and Anand Balki is the director of the film.

The official release date of Andhaghaaram on Prime Video is likely to happen towards the middle of June 2020. However, reports suggest direct OTT release is most likely to be confirmed for Server Sundaram.Server Sundaram has already released on the pirated online movie website Tamilrockers.