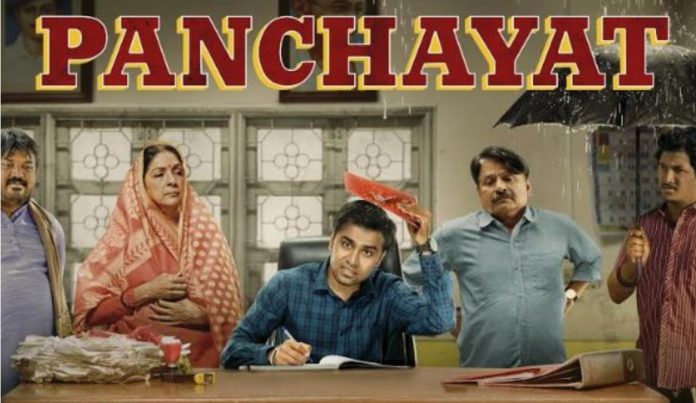 The country has been in lockdown since April 14th so as to combat coronavirus. Online streaming platforms are doing their bit to keep the audience entertained by releasing one show after another. Amazon Prime Video began streaming a new web series in collaboration with The Viral Fever (TVF). Panchayat was released on 3rd April 2020.

The trailer of Panchayat begins with Abhishek (Jitendra Kumar) complaining to a friend that he will receive a meager salary of Rs 20,000 as a secretary at a village panchayat. His friend, whose character name is unknown (Biswapati Sarkar), tries to get him to take up the job saying that he will be able to have an adventure at a young age and that he’ll experience rural India in flesh and blood. Abhishek has no interest in whatever he says but takes up the job nevertheless. While in the village he is introduced to the village head Manju Devi (Neena Gupta) and her husband Brij Bhushan Dubej ( Raghubir Yadav). Brij wants to offer Abhishek a room at their house but Manju is against this as they have a young daughter at home. Abhishek would be a good match for their daughter since he is the same caste as them but the problem is that his salary is too less.

Abhishek begins to uncover the problems of village life. The community being close-knit makes his work double as well as gives him more responsibilities than he wishes to have. When he reaches his breaking point, Abhishek talks to his friend who advises him to clear CAT- Common Admission Test. This test would be his only way out of the village and would allow him to join a post graduate management course. Abhishek’s preparation for the test is met with many challenges since the electricity of the village is not constant. Gradually, he decides to install a dozen solar panels in the village. This action calls for scrutiny.

Panchayat is a latest Amazon Prime series which is to be launched in April. In the current scenario, web series are an integral part of the entertainment business especially since theaters are shut and the country is in lockdown. The best way to entertain the audience is through web series. Amazon Prime Video’s latest series is the best way to spend your day.
Other than Amazon Prime there are other shows which are streaming as well. Such as Netflix’s most acclaimed show Money Heist Season 4, Ladies Up (2020), ALTBalaji and Zee5’s Who’s Your Daddy?, other platforms like Voot, Mx participant and other OTT platforms have also introduced new shows for people to binge watch.

The latest internet series Panchayat has fallen victim to a pirated website. Panchayat has been leaked for online streaming and download prior to its release. Panchayat is an Amazon Prime Video web series. In reality, Panchayat has to be seen as a complete HD series on Amazon Prime India. But one of the most pirated websites, 9xmovies, leaked the show Panchayat in full HD 480p download print. The pirated site also uploads many other Hindi web series for download. In 2020, it is bound to release Who Is Your Daddy?, Ozark, Maska and many other Netflix hindi movies and a number of other web series and films. But since this is an illegal way of watching series we shouldn’t opt for this method and stick to the legal way of viewing.