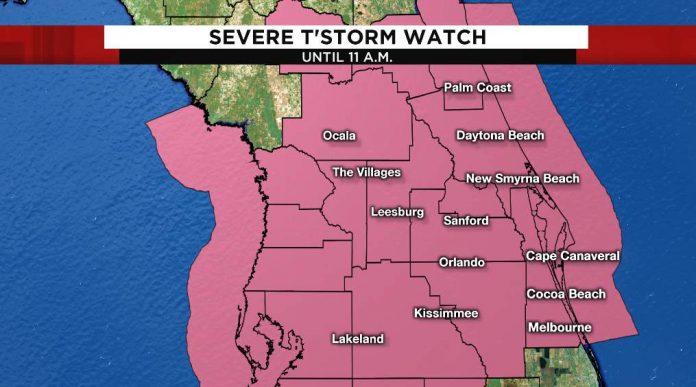 The National Weather Service Storm Prediction Center has issued a Severe Thunderstorm Watch that will remain in effect from 3:45 a.m until 11 a.m. on Saturday, December 14, 2019, for the following Florida counties: Alachua, Brevard, Charlotte, Citrus, Desoto, Flagler, Hardee, Hernando, Highlands, Hillsborough, Lake, Manatee, Marion, Orange, Osceola, Pasco, Pinellas, Polk, Putnam, Sarasota, Seminole, St. Johns, Sumter, and Volusia. Somewhat-organized thunderstorms are expected to move ashore from the Gulf of Mexico during the next several hours into a moistening and destabilizing air mass across the Central Florida peninsula and parts of north Florida. Damaging gusts are the main concern but a tornado cannot be ruled out.


A cold front is sparking a round of thunderstorms, some strong across Central Florida. The main threats will be lightning, very heavy rain and the potential for damaging wind. It is important to note that the tornado threat is not zero. Make sure you stay weather aware through Saturday morning.

The National Weather Service in Jacksonville issued a tornado warning for parts of Putnam County early Saturday morning after radar detected a severe thunderstorm capable of producing a tornado. The primary threats include isolated damaging wind gusts of up to 70 mph and a tornado or two are possible.

The Putnam County Internal Alert System began sending notifications just after 4 a.m. for areas near Bardin and Palatka. The warnings were then expanded to widespread arts of Northeast Florida including southern St. Johns County and northeastern Putnam county.

The warning asked anyone in the area to take precautionary preparedness actions by seeking shelter in an interior room on the bottom floor of a sturdy building and avoiding windows. Anyone in a mobile home or vehicle is asked to move to the nearest shelter to protect themselves from flying debris. Heavy rainfall can hide tornadoes, so the best course of action during a tornado warning is to take cover immediately. Do not wait to see or hear a tornado.

The warning was extended through 5:15 a.m. in Putnam county as the storm moved through the areas. For St. Johns County, the warning is in place through 5:45 a.m. near Crescent City.