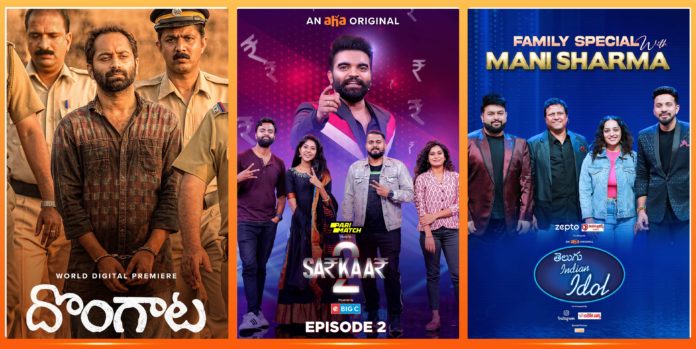 Hyderabad, 5th May: This week, aha brings a range of captivating shows and a world digital premiere for its ardent viewers. The brochure celebrates with a choc-a-bloc entertainment offering with Mani Sharma’s special episode on Telugu Indian Idol along with singers’ special on Sarkaar 2 and the world digital premiere of Fahad Fasil’s ‘Dongata’ – a Malayali national winning movie Thondimuthalum Drikasakshiyum. Be it music, fun & entertainment, drama and action… there’s an endless choice for its loyal and novel audience.

The movie marked The Great Indian Kitchen actor Nimisha Sajayan’s debut. The film revolves around Suraj Venjramodu and Nimisha Sajayan, a newlywed couple who decide to move to another place after their family and others refuse to approve of the intercaste wedding. A local thief (Fahad Fasil) steals Sreeja’s chain while the couple is communicating on a bus, and what happens following forms the rest of the plot. Additionally, this is the second film of Fahad Fasil post Pushpa – The Rise in Telugu medium. The movie is set to premiere on May 6th, at 12 AM, exclusively on aha.

Telugu Indian Idol, the world’s biggest stage for music, has proven to be a platform for mega talent. Every episode has been bringing out the best performance in every contestant. Streaming on aha, every Friday and Saturday, the maiden Telugu Indian Idol is hosted by Sree Ram Chandra and judged by Nithya Menon, Thaman and Karthik. This week, the show will witness the mega composer Mani Sharma as a special guest who will be sharing his knowledge and some fun trivia with the participants. Do not miss to watch the show 9 PM only on aha.

Taking the reality show genre to a whole new level with 2x thrill, 2x excitement, and 2x entertainment, Sarkaar season 2 boasts of the bidding game where the special guest should be able to guess the questions. The final participant who can sustain until the 4th round is playing the game with Sarkar himself, i.e., Pradeep Machiraju. On May 6th, the show is set to entertain the viewers with special guests – Hema Chandra, Madhu Priya, Mohana Bhogaraju and Saketh Komunduri. So, do not miss the double joy and entertainment this Friday at 6 PM, only on aha.

So, what are you waiting for? Do not miss to watch the world digital premiere of ‘Dongata’ and stream into Telugu Indian Idol and Sarkaar season 2 only on aha.