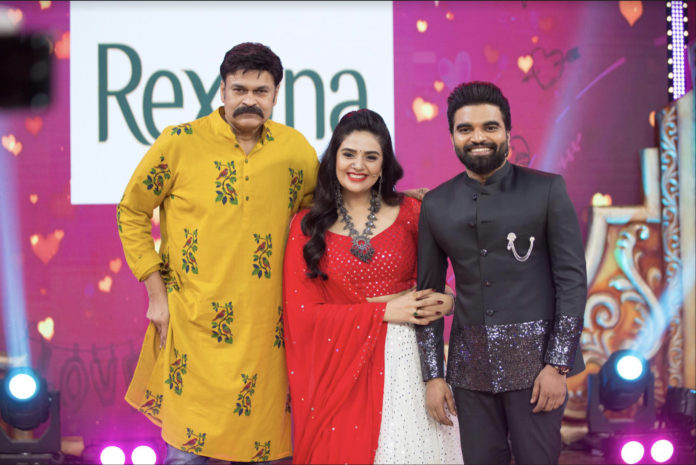 To bring positivity and cheer during the ongoing pandemic, Zee Telugu takes yet another step to ensure that its viewers stay engaged, culturally connected and entertained while staying at home. With the festive season setting in, Zee Telugu has all the ingredients in place to make this Dussehra filled with fun and entertainment. The channel welcomes the festivity by launching an original track named ‘Dussehra panduga anta’ sung by SRGMP season 13th contestants and telecasting the special program ‘Chi Pradeep Ki Chi La Sow Sreemukhi Namaskaristu Vrayunadi’ on 25th October at 5 PM

‘Chi Pradeep Ki Chi Lo Sow Sreemukhi Namaskaristu Vrayunadi’ will be a grand affair with television celebrities in their celebratory best – dressed in festive finery, dancing to superbly choreographer performances, on the grandeur sets ever. The event will be hosted by exuberant Sreemukhi and the charming Pradeep Machiraju. Zee Telugu’s most dynamic personality Nagababu along with his daughter Niharika Konidela will grace the event as the chief guests. Anasuya Bharadwaj, Jani Master, Pandu Master, Venu, Dhanraj, Chandra, Gully Boys etc., will make their presence felt.

Furthering its pursuit to spread positive vibes and meaningful entertainment during the festive time, Zee Telugu gives tribute to Colonel Santhosh Babu, an Indian military officer in the Indian Army and the commanding officer of 16 Bihar Regiment. He was killed in action during the 2020 China – India skirmishes. Bobby and Mahesh paid had conferred Colonel Santhosh Babu with the song Ashapasham from C/O Kancherlapalam.

The celebration doesn’t end here as giving a perfect adieu to the festive week, the channel launches an original track to celebrate the festivity. ‘Dussehra panduga anta’ composed by Saketh Komundari and penned down by Sagar Narayana M, aims at giving a varied perspective of the festival along with sharing some traditions and fun passed down through generations. The song is sung by Bharat, Yasaswi, Pragna, Ananya and Venkata Chaitanya. Marching ahead, Zee Telugu would be launching an album with the SRGMP 13th season contestants at the end of the season.

To ensure you do not miss out on your favorite Zee Telugu shows, choose the Zee Prime Pack that includes ZeeTelugu, and Zee Cinemalu alongside 7 other top channels of the Zee Network that cater to the daily entertainment needs of your entire family at Rs. 20 per month only. For further information, contact your DTH or Cable operator.

Zee Telugu is the Telugu General Entertainment Channel of Zee Entertainment Enterprises Ltd (ZEEL). Launched on 18th May 2005, Zee Telugu was the first entrant from Zee bouquet to enter South India. Zee Telugu offers a variety of shows that cater to the entertainment preferences of over 75 million Telugu audiences across India every week. From fiction shows to reality shows and talk shows, the channel has multi-genre offerings and is widely accepted as the ultimate entertainment destination. ZeeTelugu creates exceptional content by offering fiction shows with unique story-lines, state-of-the-art non-fiction shows & events with extraordinary formats, and acquires satellite right to some of the largest Tollywood movies that appeal to viewers across age groups.