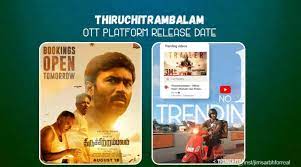 Sun NXT bagged the OTT release rights for ‘Thiruchitrambalam’. The movie will release soon on Netflix too for its direct OTT release. However, there are speculations about the production team deferring the plans for now. The makers announced the release on the OTT platform only after 35 days of its theatrical release. The movie released in theatres on the 18th of August 2022.

Sun TV bagged the satellite rights for ‘Thiruchitrambalam’. However, the movie’s OTT release takes precedence in its release strategy. According to reports, Thiruchitrambalam will be released in Sun NXT OTT platform. There are also discussions around Netflix releasing the movie on its platform in October 2022.

‘Thiruchitrambalam’ is scheduled to release on Netflix/Sun NXT in the first week of October 2022 ahead of the Ayudha pooja holidays.