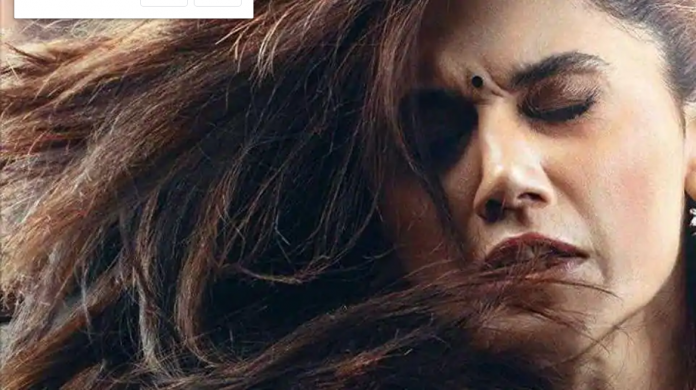 Domestic violence is something that we have been hearing and watching since our childhood. It might be happening in our house or in our neighbourhood. It is always said that it is wrong but no not even a single man thinks about it even once before hitting his wife. Thappad talks about one simple thing ‘A woman needs love and respect together’. Even though it is a just slap a man has not right to hit his wife.

The story of the film is very simple, but it hurts the viewer’s perspective on many things. Tapasi is playing the character of Amrita, who is a common Indian daughter-in-law. His family is happy. Husband Varun (Pavail Gulati) loves her very much. Everything is fine in the in-laws too. Everything is like a perfect married life. But one day, without a mistake, Amrita’s husband Varun slaps her and everything changes.

Mumbai Mirror has written about this film that the society which rejects such incidents by saying that it has happened once only, a society that deserves a sharp slap on the cheek Is, for him, it is an important and learning film. He has given four out of five stars to the film.

Koi Moi.com awarded the film four stars. He has written that even though the writing of this film has been serious, it does not cross the line of being over-dramatic. Along with this, he has also written that due to the excellent performance, difficult points are also easily understood. According to them, this film is for every man, it should be seen for the woman you love. However, the film is of 141 minutes, which is described as somewhat lengthy.

TOI.com India Times wrote, “Thappad is a quiet slap on the old faith of our society that believes,” Everything goes on in marriage. ” But really, should this happen? And this is what we need to start talking about. Right now. “

Apart from Taapsee, there are many other characters in this film, which bring many serious issues. It has been said in most reviews that the film is not just about domestic violence, but it goes far beyond that and brings many issues.

The film is directed by Anubhav Sinha. After Mulk and article 15, Anubhav has brought a third such commercial film, which raises the important issue present in the society. The film has actors like Taapsee Pannu, Pavel Gulati, Kumud Mishra, Ratna Pathak Shah, Tanvi Azmi and Dia Mirza, who do not let it get weak anywhere.

“Just a slap, par nahi maar sakta.” This one dialogue sums up what exactly Anubhav Sinha is trying to say through his movie Thappad. Starring Taapsee Pannu in the lead role, this movie brings a story on the big screen that mainly happens with women behind the doors, inside a house.

The movie is about Amrita (Taapsee Pannu). She is a perfect housewife, takes care of her husband and mother-in-law, does the household chores and finds her happiness in her husband’s achievements. But once at a party in their house, Amrita’s husband slaps her. This makes her realise her importance and her self-respect. What happens next, makes us realise that how men have been taking women for granted and how it is the Indian mentality that needs to be changed.

Thappad is written by Anubhav Sinha and Mrunmayee Lagoo, and we have to say that they have come up with a wonderful script.  The dialogues are amazing and there are many scenes that leave an impact. Sinha’s narration is perfect and the film doesn’t have any unnecessary drama. Also, I would like to point out that the film is not about male-bashing and it also talks that how there are good men in this world as well. This is clearly the best work of Anubhav Sinha to date.

Talking about performances, each and every actor has done an amazing job in the film. Taapsee Pannu is simply excellent. You connect with Amrita because Taapsee has performed so well. She throws her hat for Best Actress award. Pavail Gulati makes an impressive debut and has scenes that give him a scope to showcase his acting talent.

Maya Sarao as the lawyer is simply outstanding. Geetika Vidya as the maid is amazing. It feels so good to see Dia Mirza on the big screen after a long gap and she is wonderful in her role. Ankur Rathee as Amrita’s brother is very good. Naila Grewal also leaves a mark. Veteran actors Tanvi Azmi, Ratna Pathak Shah and Kumud Mishra are damn good.

Overall, Thappad is a fantastic film, it’s a must-watch for everyone.