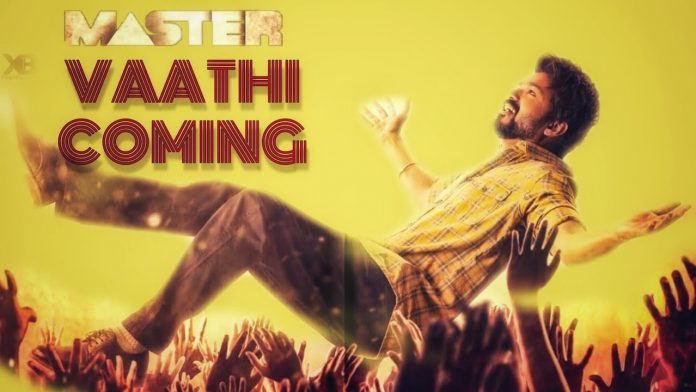 The new second single of Thalapathy Vijay’s Vaathi from Master movie will be releasing today Tuesday 10th March 2020. Vaathi mp3 will be officially revealed today evening and whoever wanted to download can download them from the official youtube page. Vaathi Ringtone will be available soon as the fans will work on it which will be available for download in a day or two.

Stay tuned for the lyrics!!

Thalapathy Vijay’s “Kutti Story” the first single from his upcoming biggie ‘Master’ has become a monster hit on YouTube views nearing the 30 million mark with a staggering 1.5million likes as well. Now it has just been announced that the second single starting lyrics ‘Vaathi’ is releasing at 5pm on March 10th. The grand audio launch will be held at the Leela Palace Hotel on March 15th and the entire even will be telecast live on Sun TV from 6.30pm onwards.

‘Master’ directed by Lokesh Kanagaraj has music score by Anirudh Ravichander with Sathyan Sooryan handling the camera and Philomin Raj editing. Thalapathy Vijay and Vijay Sethupathi are sharing the screen space for the first time with Malavika Mohanan, Andrea, Arjun Das and Shantanu Bhagyaraj playing other important roles. The mega flick is slated for release on April 9th this year.