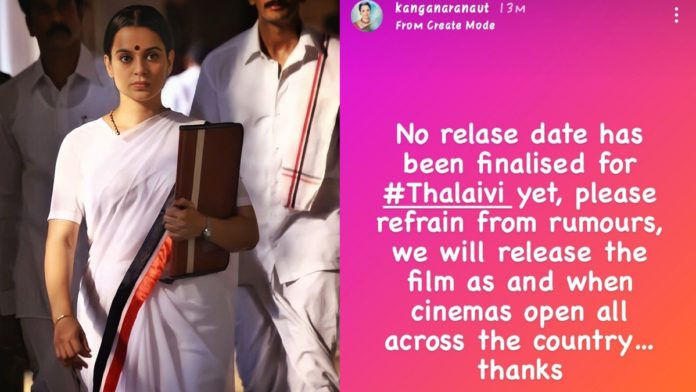 Actress Kangana Ranaut has revealed on her social networking site when Jayalalithaa’s autobiography ‘Thalaivi’ will take place. Kangana Ranaut starrer ‘Thalaivi’ directed by Vijay and starring Jayalalithaa. The film stars Aravindsamy in the MGR character, Poorna in the Sasikala character, Samuthirakani in the RM Veerappan character, and Nasser in the Karunanidhi character. The film, set to music by GV Prakash, has been slated for release since last March, but the film’s release date has been postponed due to curfew imposed across the country.

As of now, it is not known when the theaters will open, so when will the ‘Thalaivi’ movie be released? The question has arisen in the minds of fans. Following this, a few media outlets reported that the film ‘Thalaivi’ would be released on OTT, and an official announcement would be made soon.