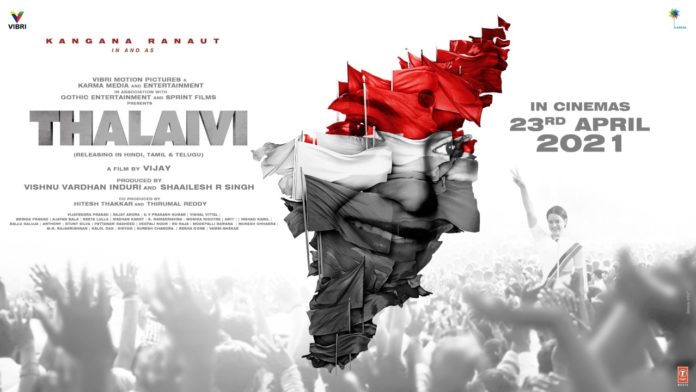 Actress Kangana Ranaut has released her autobiography ‘Thalaivi’ on her Twitter page as the 73rd birthday of former Chief Minister Jayalalithaa was celebrated across Tamil Nadu yesterday.

The video is currently going viral as she posted a video of it on her Twitter. In this post, she also said that the movie ‘Thalaivi’ would be released in theaters on April 23, 2021.

The release date of Jayalalithaa’s biopic has been announced on her birthday. Directed by AL Vijay and starring Aravindsamy in the MGR character and Kangana Ranaut in the Jayalalithaa character. The film also stars Prakashraj as Karunanidhi, Jishu Sengupta as Sobanbabu, Poorna as Sasikala, Madhu as Janaki Ramachandran, Bhagyasree as Jayalalithaa’s mother Sandhya, and Samuthirakani as RM Veerappan.

The film is expected to be a huge success as the film, scripted by Vijayendra Prasad and composed by GV Prakash, has been highly anticipated.