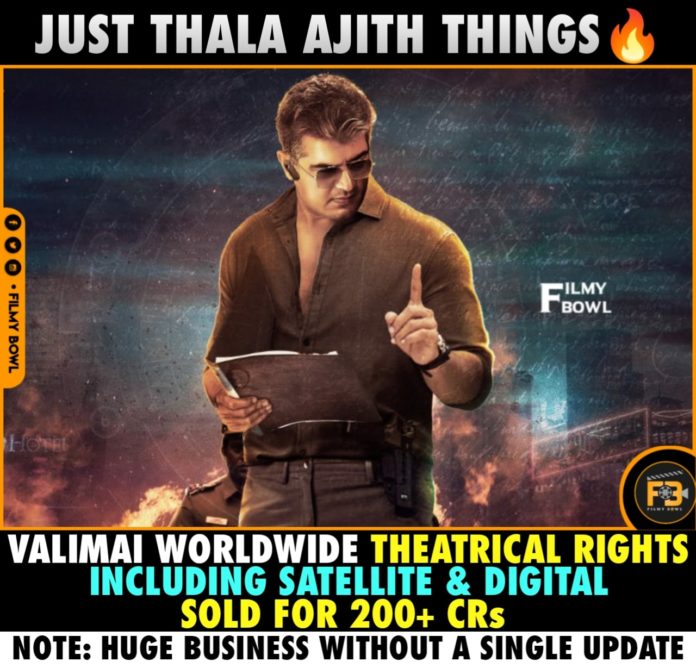 It has been reported that the shooting of Ajith starrer ‘Valimai’ is almost over and only one action sequence is yet to be shot and the ‘Valimai’ crew will be going abroad soon for this shoot. It is also worth mentioning that all the Ajith fans are eagerly awaiting the update of the movie ‘Valimai’ as the news is that the first look poster of the movie ‘Valimai’ will be released very soon.

In this situation, even before the release of the first look of the film ‘Valimai’, the news that its business is almost over has caused a great stir. It is said that almost all businesses, including worldwide theater rights, satellite rights, and digital rights, are over, and that almost all businesses are completed even before the first look of the movie is released.

The total business for the Valimai movie is around Rs. 210 to 215 crores and Ajith’s fans are elated regarding this. #ValimaiRecordBusiness is now trending on social media.

#Valimai all business deals including worldwide theatrical, satellite and digital rights sold before even the release of first look.

It's been told that #Valimai has done record pre business till now.

Highly positive talks in the industry has earned 50-60% more biz for #Thala #Ajith's movie than the regular films' biz.

It's TRUE !!! #Valimai Worldwide theatrical,Satellite & Digital rights has been sold for colossal ₹ 210-215 cr. One of the biggest deal cracked by a Tamil Film even before its first look is out. #ValimaiRecordBusiness

Famous Telugu actor Karthikeyan plays the villain in this film starring Huma Qureshi opposite Ajith. The film, which also stars Yogi Babu, is set to music by Yuvanshankar Raja and produced by Ponikapur.